Britain boasts many picturesque and historic coastal resorts and Whitby, on the eastern edge of North Yorkshire, is among England's finest. A fishing settlement since the Middle Ages, the town grew around a Benedictine abbey built in the thirteenth century; the ruins of this stunning Gothic building, which dominate the town's headland, are an unmissable feature.

“Our tour guide Asa was outstanding. I can't praise her highly enough.
Collected by Trustpilot

Abundant natural resources assured Whitby's prosperity and expansion. By the nineteenth century the town was processing the locally-mined mineral, alum, for use in the textile industry; it was a major whaling port, and thanks to plentiful supplies of oak Whitby became the third largest shipbuilder in England. HMS Endeavour, in which explorer Captain James Cook voyaged to the South Pacific in 1768, was built in Whitby. The discovery of iron-rich springs close to the town in the Georgian period enabled Whitby to capitalise upon a growing public demand for bathing in 'medicinal' waters, and the town reinvented itself as a spa resort. Hotels and guest houses appeared, and the arrival of the railway in 1839 sealed Whitby's popularity as a holiday destination. 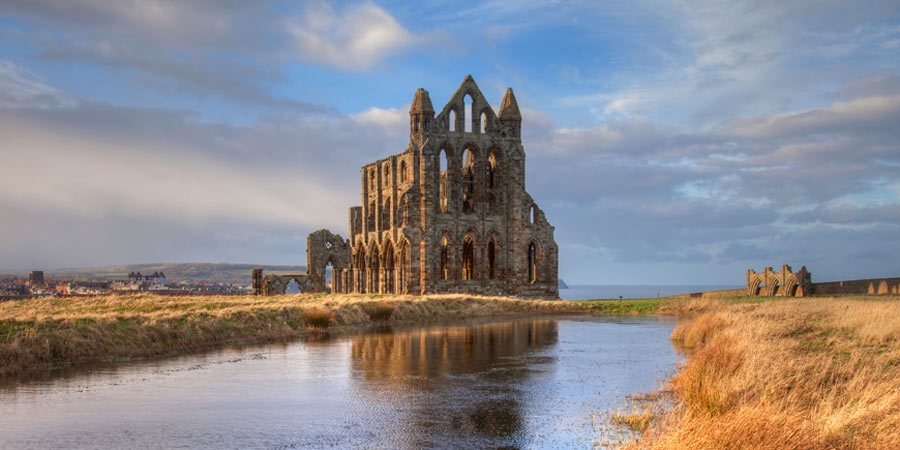 Today, the pretty town of Whitby attracts hordes of visitors each year thanks to the natural beauty of its setting beside the north Yorkshire Moors, its historic buildings, its excellent beaches and for the variety of traditional seaside amusements and entertainments it provides.

This award-winning museum is set in the seventeenth-century house in which the famous explorer James Cook lived as an apprentice seaman in Whitby. Dedicated to his life and achievements, exhibits include navigational charts, paintings and drawings, a scale model of Cook's second ship; HMS Resolution, and original letters written by Cook himself.

Beyond Whitby Abbey on Ling Hill, Whitby's lighthouse, a white, hexagonal tower (once one of a pair), was built in 1858 and stands thirteen metres high. Reached via the flight of steps that lead up the cliff from the town and then a scenic walk along the headland, the lighthouse's position offers spectacular coastal views.

Regenerated in 2008, Whitby's public park is a peaceful spot in which to relax and enjoy a variety of themed ornamental gardens and floral displays, well-tended lawns and wooded areas. Pannet Park also houses an art gallery and the superb Whitby Museum.

Victorian novelist Bram Stoker wrote his Gothic vampire novel 'Dracula' whilst staying in Whitby, taking inspiration from many of the town's sites. A guide available from the Tourist Information centre provides a fascinating walking trail around Whitby's vampiric highlights.