Discover glorious Yorkshire, from the edge of the rugged Dales to its spectacular coastline, via the majestic North York Moors. Enjoy ancient York, delightful Brontë country and scenic railway journeys. 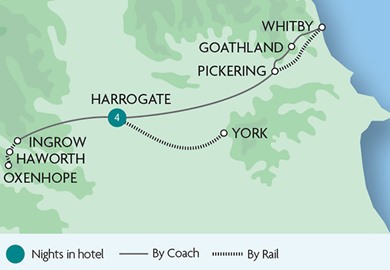 Your discovery of Yorkshire begins in Harrogate, an attractive Georgian spa town with a 200-year old tradition of providing restorative treatments. Particularly popular amongst the wealthy and fashionable in the Victorian era, Harrogate still offers spa treatments today. Here you meet your Tour Manager at your hotel. Situated at the edge of the Yorkshire Dales, Harrogate is ideally located for exploring the region, and after settling in, you are free to begin your explorations of the town before this evening's dinner in the hotel.

Take the train to nearby York today, and admire this beautiful city with its Roman and medieval influence in abundance. Discover more about this walled city and its centuries of history on a guided walking tour of the main sights. During the tour you see landmarks such as the magnificent Minster, which is one of the largest Gothic cathedrals in Northern Europe. With its wide nave and chapter house, the Minster features stunning stained-glass windows, and can be seen towering over the surrounding crooked medieval buildings from almost everywhere in the city, but is most impressive when observed up close. You also take in the quaint Shambles, one of the world's best preserved medieval streets. Lined with overhanging timber-framed buildings, some of which date back to the 14th century, the Shambles is one of the most famous cobbled streets in the country.

Following the tour you are free to continue exploring at your own pace. Perhaps visit the National Railway Museum. With over 100 locomotives on display, the National Railway Museum is the largest of its kind in the world, and offers a fascinating insight into the history of train travel. Highlights include a replica of George Stephenson's Rocket, a 1960s Japanese Shinkansen bullet train, and Queen Victoria's own saloon railway carriage, dating back to 1869. York also has two wonderful interactive history sites: for its Viking heritage, visit the Jorvik Centre, or for the bloodier side of the city's history, take a trip to the York Dungeon. Both exhibits bring the sounds and smells of York's history to life, whilst actors portray the real-life struggles of Viking women, 9th-century coin makers, and even Dick Turpin, who met his fate in York. For a more relaxing afternoon, take a stroll around the city walls, or enjoy a drink in one of the many pubs York is famous for - some of which have been around since the 16th century. Return to Harrogate at your leisure.

Today, board the coach for today's excursion to Whitby, one of the east coast's most popular seaside resorts. On the way to this iconic Yorkshire location, disembark at Goathland, better known as 'Aidensfield' in TV's Heartbeat. Your journey continues through hidden valleys and open moorland as the coach makes its way to the charming fishing port of Whitby. Crowned by its brooding Abbey, the town is famous as the inspiration behind Bram Stoker's Dracula, which incorporated local folklore to heighten the authenticity of this spooky tale. Also known for its beautiful Whitby jet jewellery, there are dozens of shops selling authentic jet accessories.

The older part of the town, located on the East Bank, is a maze of narrow medieval streets with a rich history just waiting to be explored, while the newer town is found on the opposite bank. Enjoy your time and explore the charm of the quaint cobbled streets that lead down to its handsome harbour. If you're feeling adventurous, why not climb the 199 steps up to glorious Whitby Abbey? Here, you can enjoy unimpeded panoramic views of the coastal town. And last but not the least, Whitby is home to some of the UK's finest fish and chip restaurants, which you have free time to sample before you join the nostalgic North Yorkshire Moors Railway for the return journey by steam* railway.

Worth Valley & the Railway Children

Travel by coach to Ingrow, where you enjoy a nostalgic journey on the heritage Keighley & Worth Valley railway. The steam-hauled trip takes you up the Worth Valley to Oxenhope, passing the rugged hills, rustic stone cottages and wild farmland immortalised in the muchloved classic 1970 film 'The Railway Children', which celebrates its 50th anniversary this year.

The on-train tour guide tells you more about the history of the railway whilst you pass through the West Yorkshire countryside. You also have a chance to visit the Vintage Carriage Museum in Ingrow and the goods shed in Oxenhope. You then continue to the picturesque village of Haworth, surrounded by beautiful moorland and the Pennine Hills. The village is home to the Brontë Parsonage, which was home to the famous literary sisters. It was here, amid the wonderfully dramatic landscape, that the Brontës were inspired to write novels such as Wuthering Heights and Jane Eyre.

The order of today's excursions may vary according to train timetables.

After breakfast you are free to depart from Harrogate, but perhaps take the time to visit one of the town's beautiful parks, such as Valley Gardens, Betty's Tea Rooms, or the well-known Victorian Turkish Baths first.

Please note that the itinerary order may differ dependant on departure. Please call for more details.

What our customers think
87%

based on 26 verified reviews

Keith was a good guide & enabled us to have well organised time to visit 2 steam railways & works, Whitby & Abbey , Bronte parsonage, York tour & Rail Museum. Coach travel was via scenic routes with a good driver who made good connections on each trip.

I enjoyed it, but found it very tiring.

Very good experience.beautiful conty hotel good food reasable it could have been better

Value for money plus good internery