The beautiful walled city of York has a rich and varied history, bearing multiple historic reminders in its streets, winding alleyways and precarious yet well-preserved architecture. This popular tourist destination is a favourite spot on many UK rail tours, owing to its excellent rail links, allowing you the perfect opportunity to experience Britain's best-preserved medieval city. From the pretty tea rooms to the imposing Clifford's Tower, where Dick Turpin was imprisoned, York is a city full of historical delights for you to explore.

In the Roman era, York was a provincial capital and the most northerly city in the Empire. It was here that the Emperor Constantine was inaugurated as ruler in 306AD, and later, in medieval times, the city grew rich through the wool trade. York's historical architecture is some of the best in the world; its impressive Minster is Britain's largest Gothic church and its bells have been ringing for over a thousand years.

York is filled with sights and attractions to suit any visitor, but we've narrowed it down to some of the most unmissable. 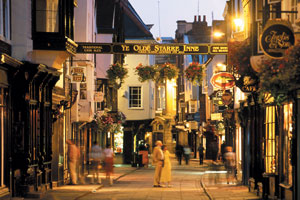 Situated in the heart of the city, Stonegate has always been central to York's layout; just six feet below street level is the Via Praetoria, the Roman road that connected the main parts of the city. Whilst strolling down this picturesque cobbled street, you're sure to find the remnants of Stonegate's history. Highlights include some beautiful stained-glass windows from the former glass painter's shop, and the perching Red Devil that peers down on passers-by. This traditional symbol for a printer's shop indicates where eccentric writer and publisher Thomas Gent had premises in the eighteenth century, referring to young boys who worked fetching tape for the printer, known colloquially in Gent's time as 'printer's devils'. 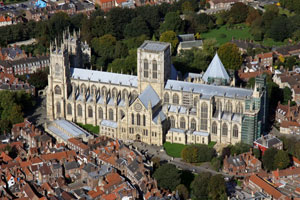 No trip to York would be complete without a visit to the stunning York Minster. One of the largest Gothic cathedrals in Northern Europe, the Minster features a wide nave and chapter house, along with spectacular stained-glass windows. Whilst this famous attraction can be seen towering over the surrounding crooked medieval buildings from almost everywhere in the city, it is most impressive when observed up close. If you're feeling adventurous, climb to the top of the Minster's tower, for breathtaking views across the city. 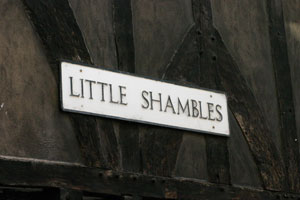 Lined with overhanging timber-framed buildings, the quaint, cobbled Shambles is one of the most famous streets in York. Formerly an ancient meat market, the Shambles is best known for its pretty 15th century buildings, many of which now serve as souvenir shops. Voted Britain's Most Picturesque Street in 2010, the Shambles sums up the historic charm of York - be sure to check it out during your visit.

Climb up to Clifford’s Tower 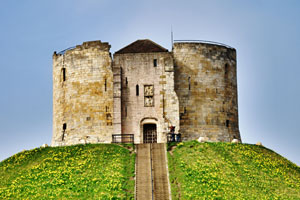 Overlooking the Castle Museum form its steep mound is Clifford's Tower. The steep mound on which the tower stands was built by William the Conqueror, who erected two motte-and-bailey castles in York. The stone tower was built during the reign of Henry II, after the original tower was burned to the ground during the Jewish Massacre. Once used as a prison, Clifford's Tower housed the infamous highway man Dick Turpin. Although originally the authorities weren't aware of his true identity, Turpin unwittingly gave himself away in a letter he wrote to his brother, and was subsequently executed in York in 1739.

The city walls of York are the most complete example of medieval walls still standing in England, and the medieval stonework still hides the remains of walls dating back even further. The city walls originally included four city gates, or 'bars', six secondary gates and forty four small towers. Climb up the ancient city fortifications to get wonderful views of York, and a true taste of the city's history.

UK rail tours are a wonderful way to experience some of Britain's most historic cities. Rail Discoveries operate escorted train tours to York, so you can experience the beauty and history for yourself.

Hospital Trains throughout the ages

What can be said about trains? They're fast, efficient, fairly stable modes of transport. Fantastic for commuting or transporting lots of heavy goods, and great at getting people to the heart of a destination with a fairly small amount of fuss furore.

The Trains of the Literary World

Literature and rail travel have always been intrinsically linked in some manner or other. A good book has alleviated even the most mundane rail journey.

Not only is it the season that finally, finally, brings a slow end to the coldness of winter, but it's when the flowers begin to bloom, the baby animals appear in fields, and when the world wakes up in a fantastic way after a long, dark time.