The picturesque Pennine village of Oxenhope in west Yorkshire dates from Saxon times. From the fifth to the tenth centuries, the beautiful rolling hills and moorland that surround the village lent themselves to agriculture; in Old English 'Oxenhope' translates as 'valley with oxen', and at this time the area was comprised of a few small farming settlements.

By the Middle Ages, Oxenhope had become two distinct hamlets: 'Near' and 'Far' Oxenhope, and were part of a manor under the control of a landowner (the 'lord of the manor') whose income came from a local corn mill.

Modern Oxenhope's story begins in the late eighteenth century with the rise in demand for textiles. By 1800, new woollen and cotton mills attracted workers who settled in the valleys around the village. The arrival of the Keighley and Worth Valley Railway in 1867 brought cheap coal and greater prosperity to Oxenhope's textile and other industries until their decline after the Second World War. 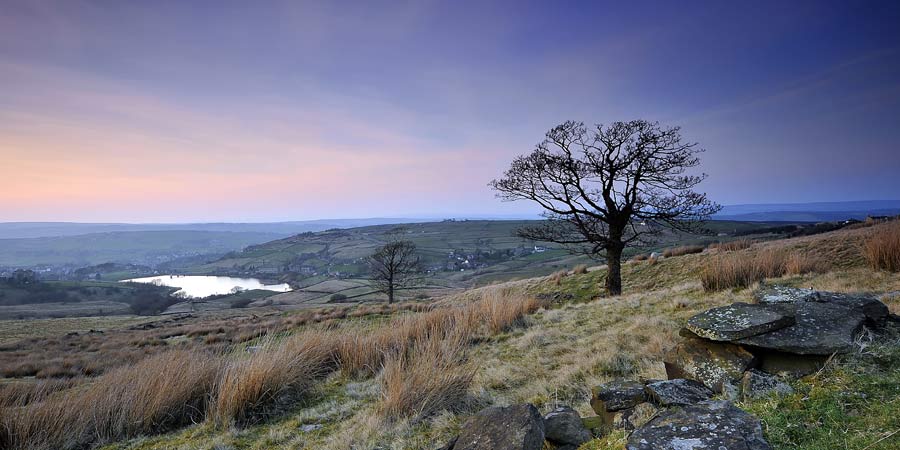 Nowadays Oxenhope's mills may be silent, but the village's timeless charm remains. Set in an area of outstanding beauty Oxenhope is a perfect setting from which walkers can explore the unspoilt Yorkshire countryside. The village itself contains a wealth of Victorian architecture, and Oxenhope's immaculately-restored and historic railway station - the terminus of the scenic Keighley and Worth Valley Railway line - is unmissable.

In its industrial heyday in the 1850s, Oxenhope boasted around twenty mills. Today, Brooks Meeting Mill is only one of two of these historic buildings still used for manufacturing. Built from locally-quarried sandstone the mill is a fine example of Victorian architecture.

Built in the Norman architectural style, the Church of St Mary the Virgin in Oxenhope is believed to have been influenced by Durham Cathedral. Consequently, the church appears to be much older than its 1849 construction would suggest. The church is notable for its bell tower which contains a full peal of eight bells, and for its pictorial stained-glass windows.

Oxenhope's upper town presents a mixture of architectural styles from different periods of the village's history; farmer's cottages dating from pre-industrial times sit alongside the tightly-packed terraces that housed Victorian mill and factory workers. The unusual ironwork of the railings, gates and balustrades here follows the unique 'Oxenhope style'.

A former mill field once used for grazing horses, Millennium Green is now a peaceful wildlife conservation area and Oxenhope's village green upon which a monthly farmer's market is held in the summer.