The village of Haworth, situated amid the majestic moors of the South Pennine hills in West Yorkshire, is the epicentre of the breathtakingly-scenic area known romantically as "Brontë Country".

The star attraction of this handsome Yorkshire village is the historic parsonage which stands atop a hill beside St Michael and All Angels church. Parish priest Patrick Brontë moved here in 1820 with his wife Maria, son Branwell and five daughters. Initially the family was beset by tragedy; Patrick's wife, aged 38, died the following year and two daughters, Maria and Elizabeth succumbed to tuberculosis in childhood.

It is the literary legacy, however, of sisters Charlotte, Emily and Jane Brontë that Haworth celebrates. The parsonage, now a museum in which the rooms have been lovingly restored, furnished and decorated exactly as they were when the Brontës lived there, was the place in which classic novels including Wuthering Heights, Jane Eyre and The Tenant of Wildfell Hall were written. 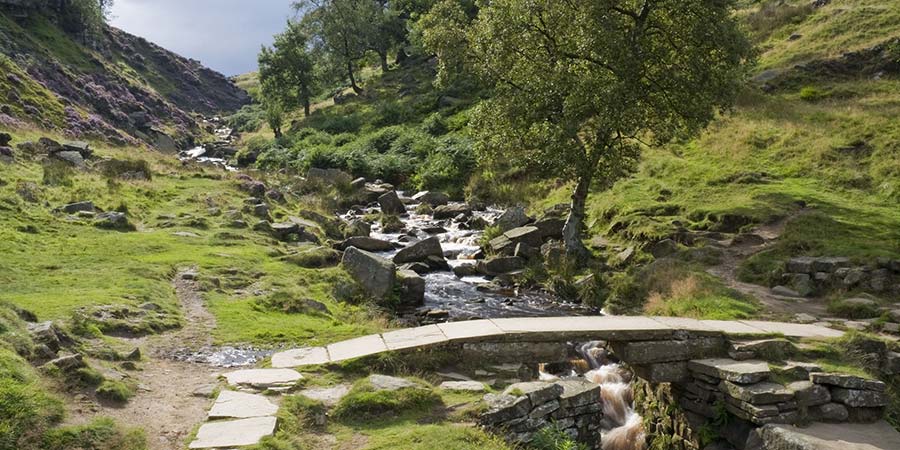 Local devotion to the Brontës is evident throughout Haworth, but there are other reasons to visit. Numerous walking routes traverse the magnificent surrounding countryside, often featuring locations that inspired the sisters' work. Haworth is also a stop on the Keighley and Worth Valley Railway, where guided tours of the station's historic engine sheds and journeys through Brontë Country by steam train are experiences not to be missed.

A chapel has existed on the site of Haworth's parish church since the fourteenth century, although the oldest remaining section of the current St Michael and All Angels church is the base of the tower which dates from 1488. Peaceful and atmospheric, the church is notable for its ornate interior, stained-glass windows, and for its remarkable graveyard which contains an estimated 42,000 burials.

This sign-posted route, approximately a five-mile round trip which leads from Haworth to a series of small waterfalls, offers a pleasant walk through the beautiful moorland landscapes which feature in the Brontë sisters' novels. Points of interest include an 'L'-shaped boulder known as Brontë's Chair and the remains of the Brontë Bridge which, until it was washed away by flood in 1989, crossed the brook into which the waterfall flows.

Haworth's award-winning Central Park is renowned for the beauty of its formal flower gardens and well-tended lawns. As well as providing a pretty and peaceful spot for a picnic, the different areas of the park are connected by pathways suitable for all abilities, affording attractive views of the village.