Last week, we left Joanna Lumley amidst the bright lights and bustle of Tokyo, Japan's hyperactive capital. Episode 2 opens with a dramatic reminder of the city's chaos; vast crowds of people, neon billboards flashing against the dark night skies, and non-stop traffic.

Joanna is astounded by the pace of the 'colossal' capital, saying, "it's endless, like a perpetual Times Square or Piccadilly Circus, just multiplied over and over again." The actress continues, "this is a place that assaults your every sense, where everything feels like an unfathomable matrix of discombobulation. I can't wait to explore it."

Recapping her adventures through Japan so far, Joanna tells us that she has discovered a land of great natural wonder with a rich culture, formed over thousands of years. But now, she's on the main island of Honshu, and she's about to delve into the modern, and sometimes crazy, metropolis of Tokyo - the centre of power in Japan for almost 400 years. 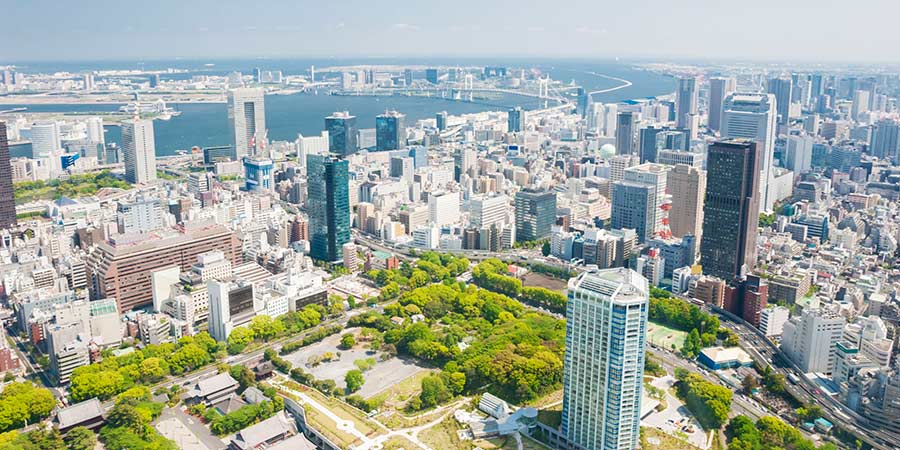 To get a better understanding, and a sense of the scale, of the megacity, Joanna takes to the air in a helicopter, affording her almost unfathomable views. The sheer size of the city is mind-blowing, with endless buildings stretching out as far as the eye can see - fascinating, considering Joanna tells us that almost everything we can see was built after World War 2 - a result of the city being destroyed after being firebombed by American forces. "So," Joanna says, "it pulled up its bootstraps and began to grow." In the aftermath of the bombing, locals' single-minded dedication meant the city was built from ashes into the world's second-largest economy, and a city with "culture, security, excellent food, and extraordinary courtesy." Incredibly, despite its immense size, Tokyo is a rich city with very little poverty, a low crime rate, and a world-class transform system. It's unsurprising that it has won the accolade of one of the most liveable cities in the world.

Back on the ground, Joanna immediately notes the sheer volume of people living and working in the metropolis; a third of the population of Japan, in fact. She takes the remarkably clean and efficient Tokyo metro to Asakusa, the old entertainment district, where she heads to Kappabashi to explore the shops. The name Kappabashi translates as 'kitchen town', and shops around here sell a host of restaurant supplies, from chef's whites to baking trays. But, there's one shop that Joanna is particularly taken by - a "fantastic little shop [which] helps explain Japan's bewildering menus". The shop supplies the restaurants of Tokyo with the plastic food they display in their windows, and Joanna is amazed at how realistic it all is, before she spots a sushi clock and chuckles, "it's shrimp past mackerel." 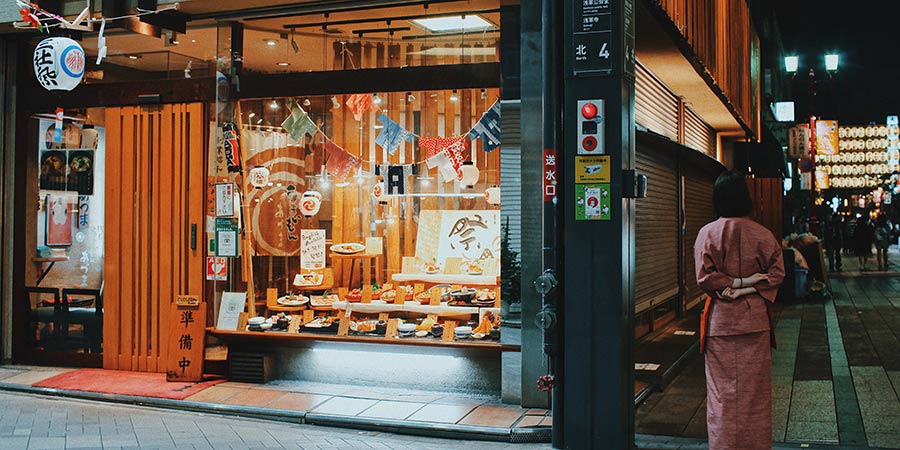 Courtesy and good manners are big in Japan, says Joanna, and are learnt from a very young age, especially at mealtimes, She's at a local kindergarten where the children are about to tuck into their lunches - carefully prepared bento boxes featuring adorable characters made from sushi rice - and they're singing a jolly song with lyrics including "eat everything" and "chew well".

This school is unique in Japan, in that it goes beyond teaching traditional values. We find out that rather than a normal focus on discipline and conformity, here, free thought is valued. Joanna meets the school's brainchild and principle, who tells her that the children here are encouraged to have free spirits; they accept that every child is different, and push them to embrace their individuality.

"Unlike the west, individuality has traditionally been looked upon with misgivings in Japan. I've even heard a famous old expression, ''the nail that sticks out must be hammered down'. But here, in the wastelands of a Tokyo suburb, one person is striving to be different." Joanna meets Minori, a 23 year old credited with reinventing a centuries' old Japanese style called Shinonuri, which means 'painted in white.' Joanna says that while she may look like a modern-day Geisha, she actually designs all her own clothes and makeup, and has even been featured in Vogue magazine - it's a really beautiful form of artistic expression. After watching Minori's photoshoot, the pair sit down for a chat. While Minori says that people in Japan tend to be shocked by her, Joanna praises her for breaking the mould in a country of conformity and being unique, telling her "you've won a new fan - I think you're wonderful." 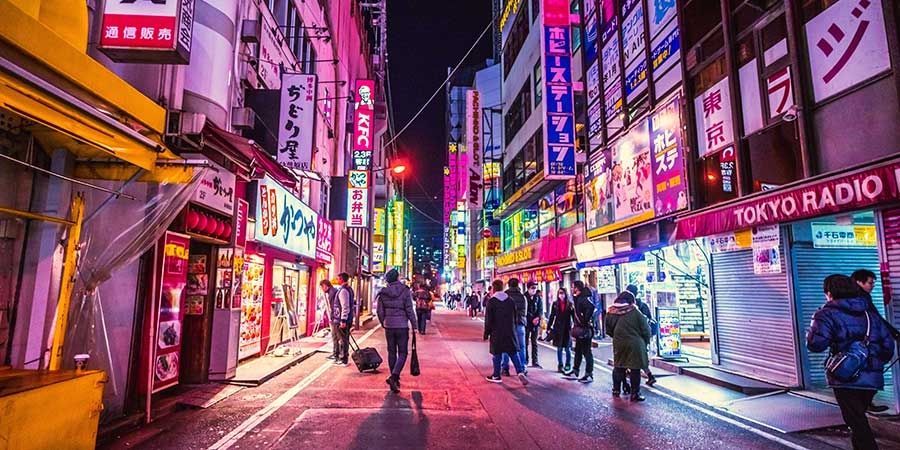 It's after dark, and Joanna is in the Akihabara district of Tokyo, where the theatricality continues. She is attending a Kamen Josh show, an 18-piece girl group whose name translates as 'masked girls', and who perform twice weekly to their devoted fans, the vast majority of which are men. Joanna tells us that almost a third of Japanese men are single today - a fact which perhaps explains the enthusiasm of the audience. The adoration of the girls appears to be not only expected but encouraged, with glow sticks available for men to buy with different colours signifying which girl they like best. Joanna postulates that perhaps this is a way for the men to feel a sense of belonging and camaraderie. Indeed, as Joanna notes, the audience of the show seems to be as involved as the performers, creating at atmosphere she refers to as "exciting."

The following day, Joanna leaves Tokyo and travels south, heading for the legendary Mount Fuji - Japan's tallest mountain, which has an almost mythical status here. But first, she makes a quick stop to visit a local artist. Joanna says that she has a beautiful woodblock print of Mount Fuji at home, and has always wanted to see the painstaking skill it takes to create these traditional Japanese works of art first hand. Meeting an artist, one of the last masters of the art form, she says, she is shown how the intricate process works. It's a tremendous skill, one which Joanna says harks back to a time before computers were here and ensuring perfection. 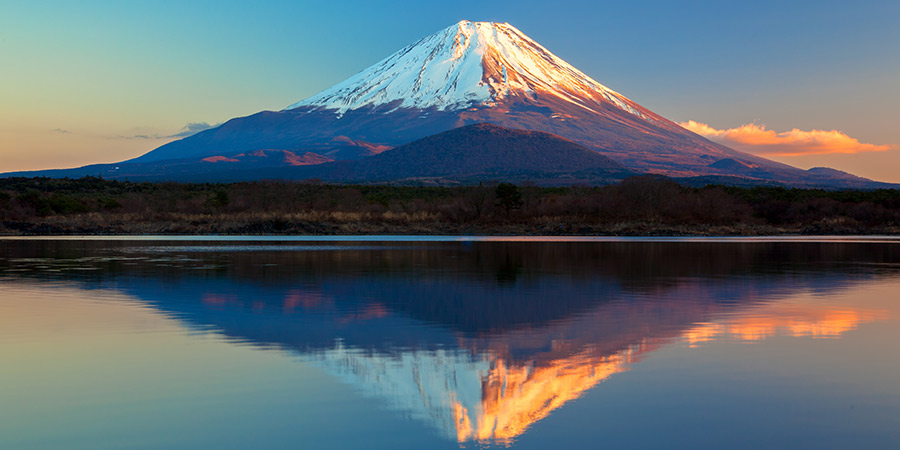 A couple of hours later, and Joanna is approaching the real thing. "Mount Fuji, in all her splendour," says Joanna, as we take in an incredible vista of the towering peak, surrounded by azure waters and set against a clear blue sky. "And then today, of course," she says, pulling the picture-perfect postcard away from the camera to reveal the same scene, only notably more grey and foggy, the mountain barely visible, "it's not quite like that - fail."

Undeterred, Joanna continues moving south through Honshu. Travelling through the legendary Kiso Valley, Joanna stops to walks on the Nakasendo Way, an ancient road which once linked Tokyo to Kyoto, which she describes as once being "like the M1". The route is scattered with quaint little towns and villages, and Joanna is walking down a section of the path to a village named Magone, which she reaches along a winding, remote route filled with beautiful bamboo trees. Along the route, there are many reminders of the rich history of this area; "it seems at every turn, there's a story of Japan's past to be told", Joanna says, pausing at a waterfall where Samurai soldiers once practised.

A little further along the route and Joanna comes across a charming tea house. After a warm welcome, she is given freshly made tea and a snack of what she presumes to be radishes (delicious, she says!), before being serenaded with a traditional local song. It's a lovely moment and a great reminder of the hospitality shown towards visitors here. 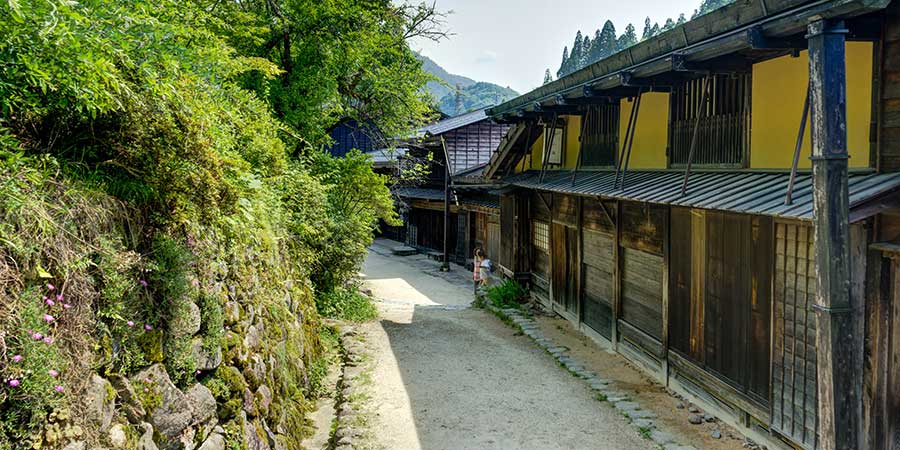 Next, Joanna is introduced to another iconic part of Japanese culture - Geisha. Exploring the Gion district of the city, Joanna points out the lack of tourists, since the bars and restaurants here are invitation-only - "it's a world shrouded in secrecy". Joanna meets with Tomitsuyu, an 18-year old Geisha-in-training who is 3 years into a rigorous 5-year programme which will prepare her to become a fully-fledged Geisha. The pair sit down to a tea ceremony as Joanna learns more about Geisha culture.

The word Geisha translates to 'art person'. Geisha were entertainers in the 18th-century, and contrary to popular belief, were distinctly separate to the courtesans. Joanna asks Tomitsuyu what attracted her to the Geisha lifestyle, and is told it was through the appreciation of the Japanese garment, Kimonos (her family worked in the industry) and an interest in Japanese history that led her to the job. 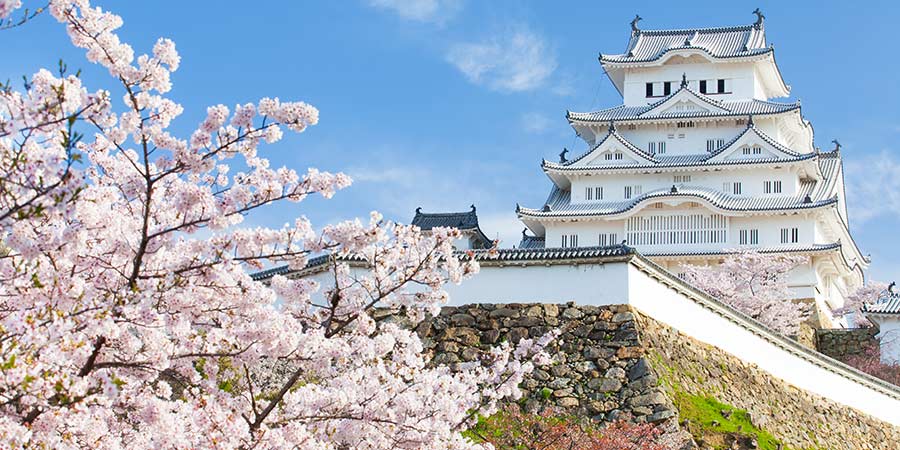 Next, Joanna is introduced to another iconic part of Japanese culture - Geisha. Exploring the Gion district of the city, Joanna points out the lack of tourists, due to the fact that the bars and restaurants here are invitation only - "it's a world shrouded in secrecy". Joanna meets with Tomitsuyu, an 18-year old Geisha-in-training who is 3 years into a rigorous 5 year programme which will prepare her to become a fully-fledged Geisha. The pair sit down to a tea ceremony as Joanna learns more about Geisha culture.

The world Geisha literally translates to 'art person'. Geisha were entertainers in the 18th-century, and contrary to popular belief, were distinctly separate to the courtesans. Joanna asks Tomitsuyu what attracted her to the Geisha lifestyle, and is told it was through the appreciation of the Japanese garment, Kimonos (her family worked in the industry) and an interest in Japanese history that led her to the job. 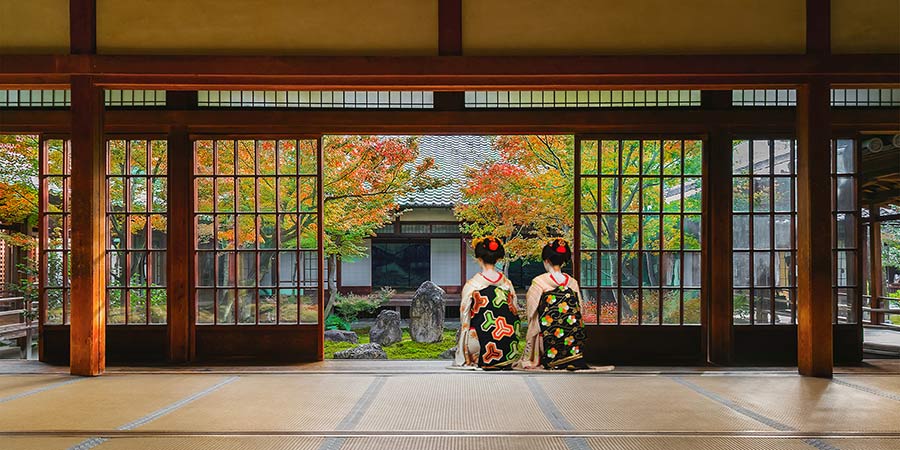 Eager to learn more about a day in the life of an apprentice Geisha, Joanna asks Tomitsuyu to talk her through her day. Tomisuru spends around an hour each morning fixing her hair - hair which is meticulously styled once a week by a specialist hairdresser - before going to lessons for a number of different practices, including tea ceremony training, flute lessons, and singing. In the afternoon, she will get ready again, adorning her hair with intricate accessories and applying the typical red, white and black Geisha makeup, before going to work. Joanna asks her if she misses the regular teenage life of listening to music and going out with friends to which Tomitsuyu replies yes - she isn't allowed a phone or internet, so she misses keeping in touch with her parents and friends over Facebook. Joanna expresses sadness at the normal adolescence the teenager will never be able to have, but is also in awe at her dedication. After a while, their chat turns to travel, and Joanna is given a glimpse of the regular teenage girl underneath the hair and makeup. Joanna asks Tomisuru if she's ever been to England, to which Tomisuru replies no, but she would love to. "And what would you do in England?" asks Joanna. The enthusiastic reply? "I would go to Harry Potter World!"

Next time, it's the final leg of Joanna's journey, and she's discovering the secrets of ancient Japan. It's been an excellent series so far, and we can't wait to see the conclusion!

China: Where History meets the Future