Halloween, but not as you know it

It's that time of the year again. Evenings are long and dark, the wind is often strong and howling, often gentle and murmuring, but chilling you to the bone nonetheless. The leaves have scattered themselves on the ground and you can't escape a curious crunching sound no matter where you walk. It's the time when the spirits roam free.

The western world is all set to party as Halloween draws near. Healthy pumpkins fresh out of the patches, jack-o-lanterns of varied sizes, curious trinkets, suspicious looking sweets, and face paint palettes have flooded the stores. Children are ready with their tricks should the treats be denied, and adults have their own 'spooky' experiences planned. Beyond the glitz of costumes and celebrations, the legends of All Hallows' Eve are fascinating and some of them downright hair-raising. Even more interesting is that different cultures have events that are 'eerily' similar to Halloween and they all fall during this time of the year.

The Halloween that has gained global popularity these days is largely American. Its roots, however, lie in the ancient Celtic celebration of Samhain whose traditions were carried across the pond by Irish immigrants in the 19th century. The ancient Celts celebrated Samhain after completing harvest work and druid priests performed rituals for the wellbeing of the entire community at the behest of the local chieftain. The Celts believed that the walls between the different worlds could be breached during this time and often left offerings in the fields for faeries and spirits. In the medieval period, big fires were lit in Ireland and Wales to ward off the witches and imps that might enter their homes and stir trouble. In Wales fireworks were set off and in the northern part of England, men paraded around with tins, bells or other noise-making devices to frighten the evil spirits away.

As the Celts celebrated 'darkness' during this period, beginning their days at sundown, they also took time out to honour their departed ancestors. On the dining table, extra plates laden with food were laid out so that the souls could come back to join their families. Candles were lit to guide the ancestors' souls as they made their annual journey. The modern concept of trick-or-treating is also said to have originated from the Irish and Scottish practice of donning a costume and going from door to door singing songs to the dead. In return, they would be gifted cakes by the family members. 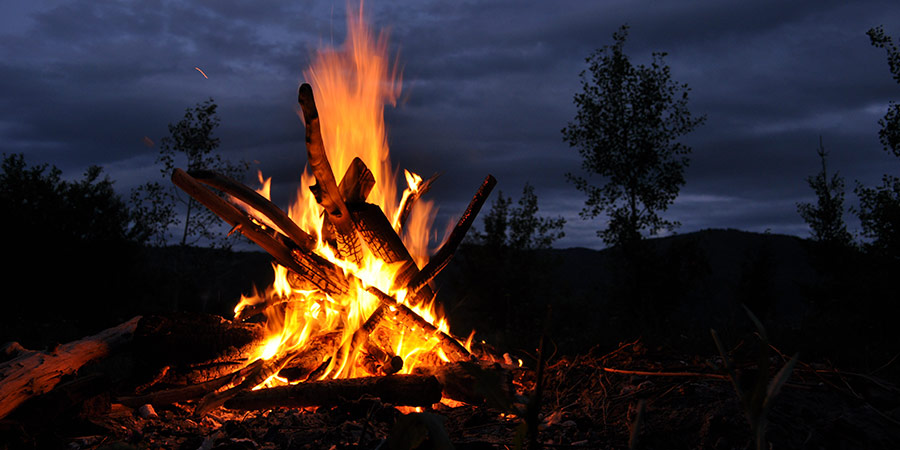 In Mexican tradition, the dead are to be cherished rather than mourned and their celebrations of Dia de los Muertos or the Day of the Dead pay heed to this custom. The Day of the Dead originated thousands of years ago among the Aztecs and Toltecs, who treated death as a continuation of life and considered it disrespectful to mourn their absence in this world. The departed family members are fondly remembered every day and at this eve the doors to the other world open and they return briefly to be with their loved ones. It takes place on November 1 and 2, the same time as All Saints' Day and All Souls' Day according to the Catholic Calendar. Like Samhain, it is also celebrated after the season of maize harvest is over.

On these 2 days, an altar is set up and families put Ofrendas or offerings for their dead relatives. Favourite food and drinks of the deceased people are set out along with heaps of marigold, the flower that guides each spirit to their respective Ofrendas. Skulls are often decorated with floral patterns and a smile is put on them to remind people to laugh at death. Catrina dolls and elaborate face painting are also part of this ritual, signifying that beneath the cage of flesh and blood we are all skeletons. In 2008, UNESCO recognised the festival as cultural heritage of humanity. 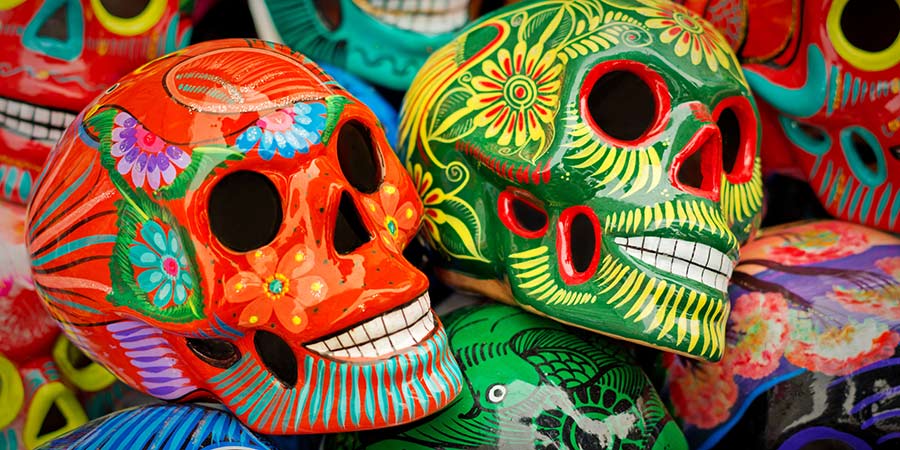 Throughout September and October, Hindus in India celebrate major festivals in honour of some of their more important deities. The period of celebration begins with Pitru Paksha when homage is paid to deceased forefathers. Towards the end of October, at the end of the harvest season, Diwali is celebrated to offer thanks to Laxmi, the Goddess of wealth. This is the single largest festival of a largely agrarian society. Remaining true to its diverse nature, each region of the country has its own rituals and different ways to celebrate.

In the state of West Bengal in eastern India, the day before Diwali is Bhoot Chaturdashi. Bhoot means ghost and Chaturdashi is the 14th day of the waning of the moon, the 15th day being the new moon. Residents of the state believe that on this day the veil between this world and the next is lifted, allowing their ancestors to pass through. Each household lights clay lamps at their doorstep to guide their departed ancestors home. The lamps are meant to guide the spirits home to their living relatives. Another of the day's rituals includes eating 14 varieties of greens with boiled rice. The greens signify health and are meant to keep away evil spirits that might escape from the netherworld and slip into this realm through the open doorway. Lighting fireworks, including noisy ones, is common as they are believed to drive these evil ghosts away. 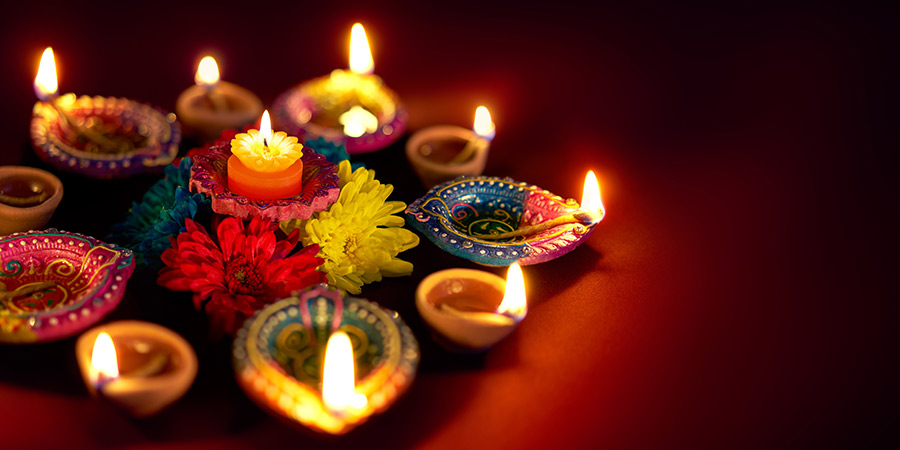 In the Philippines, the 3 days from October 31 onwards are traditionally celebrated as Pangangaluluwa, a Tagalog word that roughly translates to soul or spirit. An ancient Tagalog tradition, the celebrations are now largely restricted to provinces away from urban centres. Mere children and teenagers, often in costumes, go from door to door signing psalms in Tagalog. They represent the dead who are stuck in purgatory and urge every family to pray for the emancipation of these lost souls. The psalms are often sung in a low, hollow voice to make them sound like they are coming from the underworld.

By now, it should come as no surprise that Filipinos too believe that the doorway between the worlds of the living and the dead is open on this day. In certain parts of the country, people set fire to pieces of pine wood beside their deceased relatives' graves to guide their spirits home. Over the years, the Christian celebrations of All Saints' Day and All Souls' Day have become more popular in the Philippines and Pangangaluluwa has taken a backseat. In recent years, efforts have been made to revive the practice and give it an identity beyond Halloween. 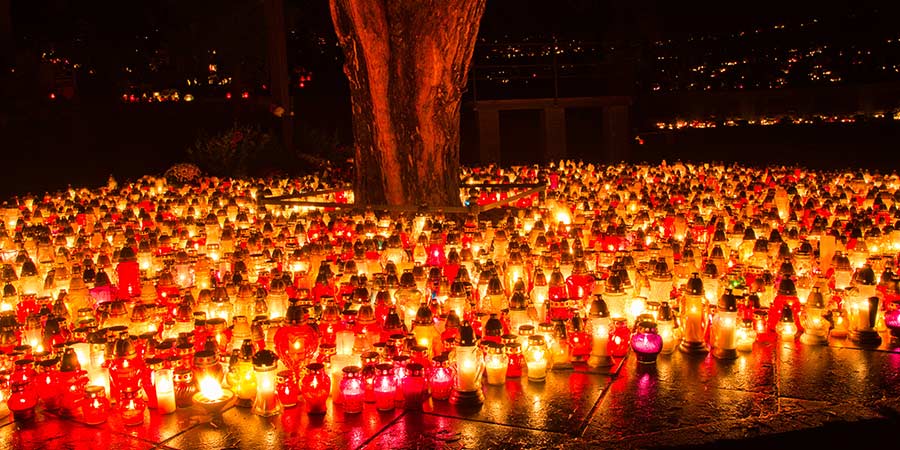 As you sip on a cup of delicious pumpkin spiced latte or enjoy a steaming bowl of pumpkin soup by the fire, make sure to leave some for the wandering spirits that may chance upon your doorstep! Don't worry, they are harmless except when they aren't… probably check under your bed for monsters? Just joking! Have a spooky Halloween.

What to expect from an escorted group holiday

Holidays are important. They give us time to relax, recharge, see new places and immerse ourselves in local culture. Even though they're important we might only have one a year so of course, it needs to be memorable for all the right reasons.