With its Moorish history and Flamenco tradition, Andalucía distinguishes itself culturally and historically from the rest of Spain. Make the most of rail holidays to Spain by savouring specialities, such as salmorejo, and indulge in the ever-popular siesta. Enjoy exploring this beautiful part of Spain, and bear in mind these few tips to help you enjoy the region as if you were a verdadero Andaluz. We've also added in a few essential Spanish phrases to help you on your way. 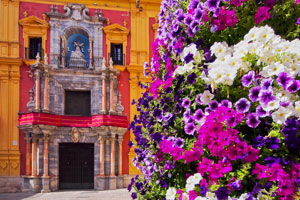 'Mañana' is the word to bear in mind when visiting Andalucía. The regions' hot summer temperatures are not suited to a busy stress-filled way of life. There's no point visiting sunbaked Andalucía with the intention of filling your days to the brim. Slow down, enjoy a more relaxed pace of life and immerse yourself in the local culture and traditions of the Spanish desert.

Everyone's aware of 'Mad dogs and English men', but Andalusians prefer to avoid the midday sun. During summer most shops will close between 2 and 5 pm, when the sun reaches its highest temperatures. Andalusians spend this time enjoying a relaxed lunch, head to a local bar or restaurant and ask for the menu del dia, this will be locally produced, fresh food for a great price. It's typical to spend a few hours savoring lunch, before heading for a quick siesta. This is probably the easiest Andalusian tradition for visitors to pick up. 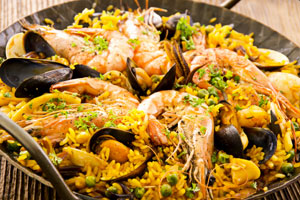 Andalusian cuisine is probably the most well-known of the many cuisines Spain has to offer. With traditional tapas available in most bars, if you find yourself with a few free hours order a cerveza and a few small plates to tide you over until dinner. However, you might find yourself ordering more and more for a chance to try everything on offer. The word 'tapas' translated to 'lid' or 'cover', originated in the bodegas of southern Spain. Pieces of bread were given to customers to cover their drink and keep out flies. These became more elaborate over time and soon became as important as the drink itself. In a traditional Spanish bar you will almost always be served a small dish of snacks when you order drinks, usually a bowl of almonds, but the custom is to order a small plate of tapas when you order a drink.

Spain has avoided being monopolised by large fast food chains, although some have tried. With fresh, local produce so readily available throughout Spain, the Spanish weren't interested in the arrival of fast food, so take your time over dinner to enjoy the amazing variety available in southern Spain. Andalusians don't normally sit down to dinner until after 8pm as this is when most restaurants open.

While in Andalucía be sure to visit a local Spanish supermarket, many visitors will be surprised at the difference from supermarkets at home. There is no 'set dressing' in Spanish supermarkets, each one is laid out differently, and they can often seem random. This is typical of the unique Spanish attitude, they are selling things you need so you will come and buy them. The fresh meat, cheese and fish counters host a spectacular array of produce. Fresh caught shellfish and gambas are always a treat. The meat counter will have a huge selection of local Jamón serrano which is sliced freshly in front of you. Jamón ibérico is one of the local delicacies, and flavor varies depending on what the pigs were fed on. 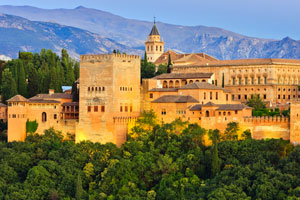 The quintessence of Andalucía is shaped by waves of history, and that history is most apparent in Granada. Sitting at the foot of the Sierra Mountains, Granada was once the capital of Spain. Stroll through the old town to get a feel for its relaxed atmosphere and former glory. While in Granada do not pass up on a visit to the beautiful Alhambra, the last, and greatest of Spain's Moorish palaces. Visiting Granada will give you a taste of both Spain's Christian, and Moorish history. While in Granada be sure to visit El Albayzín, the district still has narrow winding streets reflecting its Moorish past. Spend a morning enjoying a cerveza in one of the many public squares. As the sun begins to set, find a spot on the St Nicholas Terrace, overlooking the Alhambra, for one of the most spectacular views in Granada.

A tour of a sherry bodega in Jerez is a must. Sherry bodegas can be found all over this region, and many have been owned and run by the same families for decades. For a real taste of local history visit the Sandeman Winery, which has been producing sherry since 1790. Learn how the sherry is aged and blended to achieve the distinctive taste.

Wherever you choose to visit on your Andalusian adventure, rail holidays in Spain, with their leisurely pace and relaxed atmosphere, will help you immerse yourself into the Andalusian way of life.

While on your train holidays in America, don’t hesitate to stop off in San Francisco. Here are five places to visit via the city’s iconic cable cars.

Solo travelling is all about you – your personal preferences, your ideal meal, and your exciting excursion.

The Unmissable Stops Along the Moselle Wine Train

Tantalise your taste buds along the Moselle Wine route, one of the best rail journeys for oenophiles.