Explore the rich culture and lively cities of southern Spain

Explore the best of beautiful Andalucía on this spectacular holiday. Visit sun-soaked Seville, journey to historic Cordoba and explore the Alhambra in Granada, all from your base in charming Antequera. 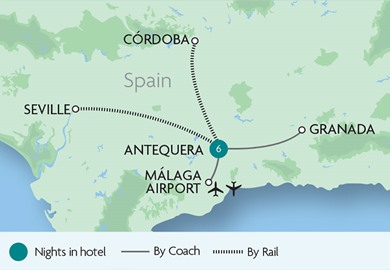 You begin your Andalucían adventure on a flight to Malaga. From here, transfer to your hotel in Antequera, your home for the next 6 nights. Antequera is a lovely sun-swept locale, and from a distance, looks like a typical medieval town with her towering churches, walls, and fortresses. You can see plenty of Spanish Baroque architecture, which has been restored and conserved diligently in previous years to retain its traditional façade. Moorish and Roman influences can be seen throughout the city and the wider region. Antequera is also home to a plethora of churches, many featuring ornate 48 SPAIN TREASURES OF ANDALUCÍA Explore the best of beautiful Andalucía on this spectacular holiday. Visit sun-soaked Seville, journey to historic Cordoba, and explore the Alhambra in Granada, all from your base in charming Antequera. interiors, so be sure to take a look.

Day 2 is spent at leisure. Antequera offers plenty for the discerning tourist, the range and variety of cuisine is definitely something to get excited about, and an excellent option if you fancy a traditional Spanish lunch.

After breakfast, travel from Antequera to the beautiful city of Seville, for a guided tour of the remarkable centre. Your first stop is the Plaza de España, where you have time to admire the beautiful buildings, fountains, and tiled alcoves, created for the 1929 'Fair of the Americas'. You finish your tour in front of the amazing cathedral, the largest Gothic building in Europe. The cathedral, which is the final resting place of Christopher Columbus, is lavishly decorated in gold. It also boasts a bell tower, La Giralda, which was the minaret of the original mosque, and offers panoramic views of its surroundings.

The afternoon is free to explore - Seville reputedly has the largest number of tapas bars in the world, so why not take a well-earned rest in a pavement café with a few plates of local specialities? You can also experience the local culture with a short visit to one of its Flamenco clubs.

History and mythology collide in Seville. It is fabled that it was founded 3000 years ago by the Greek God Hercules. The culture and architecture of the city, however, reflect its more 'recent' past, with Roman ruins and plenty of Moorish influence.

Enjoy an excursion to Cordoba, an ancient city that was once the largest metropolis in Western Europe and is now a UNESCO World Heritage site.

On arrival, take a guided tour of the city's main attractions, seeing the exterior of the famous Mezquita, or mosque of Cordoba, for which the city is world-renowned. First built in the 8th century and re-consecrated as a cathedral in the 13th century, the Mezquita is considered to be one of the greatest remaining works of Islamic architecture in the world, and is surrounded by the winding, narrow lanes of the city's Old Town. Your tour also takes you to the sprawling Juderia, Cordoba's historic Jewish Quarter.

At leisure in Antequera

Enjoy another day for you to explore the surrounding area. You could spend time in the municipal museum of Antequera, finding out about the town's archaeological history as well as later art and architecture.

Perhaps visit the nearby port city of Malaga, the birthplace of Pablo Picasso, and home to a wonderful collection of his work. Spend some time at Museo Picasso and admire the artist's creations. Malaga is one of the oldest cities in the world and boasts a wealth of ancient architecture, including the Alcazaba or the remains of a Phoenician fort and a Roman theatre dating back to 1 BC.

Today you visit Granada, a charming city at the foot of the Sierra Nevada mountains that is known for its Moorish influence and stunning cafés. Your visit begins with a visit to the stunning Alhambra, referred to as a palace city and consists of a fortress along with residential and administrative quarters.

Here you see the beautiful Generalife Gardens, begun in 1931 and finished in 1951 by Francisco Prieto Moreno. The original garden was built in the 13th century and was part of the summer palace. The garden's walkways are tiled in typical Granadian style with pebble mosaics. The garden features pools framed by flowerbeds, fountains, colonnades and pavilions.

You could also visit the Albacyin, the Moorish quarters of the city with narrow winding streets. It was declared a UNESCO world heritage site in 1984.

Today you bid a fond farewell to Spain. You transfer to Malaga Airport, to take your scheduled return flight back to the UK, where your holiday concludes

What our customers think
86%

based on 7 verified reviews

Well planned, easy to book and everything thought of

Excellent holiday especially the services of the tour manager Interesting trips and pleasant hotel. Only complaint was the number of guests trying to obtain a meal from the buffet at mealtimes. It was extremely crowded and spoilt the experience

Ideal position and plenty to explore

Dining arrangements on some days were overcrowded resulting in long delays and queues for food. Otherwise, holiday was perfect. Tours were well organised and hotel was well situated with all modern amenities and comfortable,clean rooms.

Everything was fine except for the evening buffet, the number at the sitting was far to many and the waits much to long

The tour manager, Paul MacDermott was excellent. I couldn't fault him. He really looked after us so well. All the transport & the three visits to Seville, Cordobes, Granada & The Alhambra were great, with excellent guides.. The rooms in the hotel were comfortable and of reasonable size. However, the food was not good The same choices every day from a buffet for both breakfast and the evening meal. We were also not happy with the way the food was kept warm all the time and added to throughout the mealtime. It is no wonder that I and a number of others from our group went down with food poisoning in the form of gastro-enteritis on the last day.

Excellent tours and brilliant manager but hotel not the best for food or organisation of meal times.

Very good and busy. Needed some more introductory explanation on the initial drive

We enjoyed our holiday, especially Jackie, our tour manager. She took care of us all the time, even when some travelers were very demanding! We thought the tours were very good as well as the hotel. My only negative was the hotel restaurant confusion and the rundown condition of the hotel.

The Great Lakes of Europe: Plitvice Lakes National Park
Exploring the Historic City of Cordoba
Enjoy Andalucía like a local
The Shortest Railways in the World
Helen
Luke