What to see in Warsaw

Visitors today are spoilt for choice, there is so much to do and see in Poland's capital city. Stroll by the Vistula River to the entertainment district - with real sandy beaches and a stretch of natural forest. Take in the history and culture of the city that has rebuilt itself numerous times, at one of the many museums. Enjoy Kielbasa* or another of the numerous Polish delicacies washed down with a Tyskie beer. Walk the same streets as Chopin, and learn Poland's history from walking the city's streets. 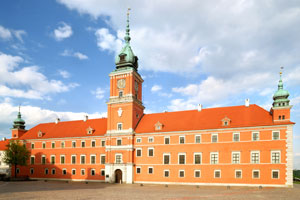 The castle's Great Tower was erected in the 14th century. In the sixteenth and seventeenth century the castle was greatly expanded and became the administrative and cultural center of the city, as well as a royal residence and parliamentary building. The castle was destroyed in the mid-seventeenth century during the Swedish Wars, but was gradually returned to its former glory in the years that followed. The Royal Castle did not fare well during the Second World War, and was bombed by the Germans in both 1939 and 1944. After the war, the new Communist government delayed rebuilding the castle until 1971, when the decision to rebuild was finally made. In 1984 the castle was finally opened to the public.

The castle today is a proud example of Poland's pride and determination. Spend a perfect day strolling around the beautiful castle and its gardens; guided tours are also available for those wanting to delve deeper into the history of the beautiful building. During your visit make sure to see the two Rembrandt paintings, gifted to the castle in 1994.

The Palace of Culture and Science 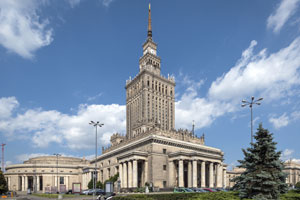 At two hundred and thirty-one meters tall, the Palace of Culture and Science is the tallest building in Poland, and the eighth tallest in the European Union. The building was completed in 1955 as a 'gift from the Soviet people to the Polish nation', in fact the buildings full name is, 'the Palace of Culture and Science in the name of Joseph Stalin'. This is the most (in)famous building in Poland.

From the buildings beginning it has been dedicated to public use: housing museums, sports venues and theatres. The building has also hosted concerts by the Rolling Stones and Leonard Cohen. Today you can experience the grandeur of the building by visiting one of the quirky museums or bars. And for a breathtaking view of Warsaw head to the city viewing deck on the thirtieth floor. 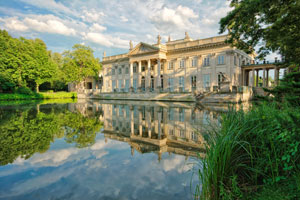 On a stroll through the beautiful gardens make a stop at the Royal Orangery, completed in 1788. The orangery houses the Gallery of Polish Sculpture, the only gallery of its kind in Poland. On the shore of the Southern pond in the park, you'll discover the Theatre on the Isle. Inspired by Ancient Roman architecture, and built in the late 1790s, plays are still held here today. If you visit on a Sunday afternoon between May and September, you'll be treated to a Chopin concert. These are free and are held next to the Chopin Monument in the park. What better way to spend a summer afternoon?

Take in the culture of the Old Town 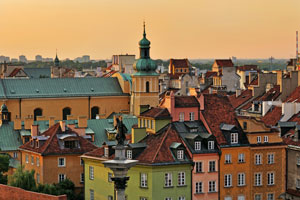 Warsaw's Old Town, unsurprisingly, is the oldest portion of the city. Popular with tourists, the Old Town Market Place sits in the center of the area surrounded by bars, restaurants and shops. This area can trace its roots back to the thirteenth century, and had been both a slum and home to aristocrats. The arrival of World War II, and the invasion of Poland by German forces, badly damaged the district. During the Warsaw Uprising in 1944, what had survived the initial bombing raids was systematically destroyed by the Germans. After the war, the Old Town was meticulously rebuilt, where possible using the original bricks and decorations - which were carefully sifted out of the rubble and restored to their original places.

So make the most of rail holidays in Europe and discover Poland's capital for yourself with Rail Discoveries.

*'Kielbasa is a polish sausage that goes well with pickled cucumbers, Polish vodka and fresh air!

The travel awards season will soon be upon us, and even though nothing has been announced yet, Rail Discoveries already has something to celebrate.

Not only is it the season that finally, finally, brings a slow end to the coldness of winter, but it's when the flowers begin to bloom, the baby animals appear in fields, and when the world wakes up in a fantastic way after a long, dark time.

The trains of the future

Welcome to the future! Please leave your slow trains, your outdated tickets and your rackety old carriages at the door.