Travelling along one of the most scenic railway routes in the world, the Bernina Express winds its way through the striking mountain scenery of the Alps between Switzerland and Italy. The line, which was completed in 1910 and boasts the title of the highest open-air railway in Europe, takes you through 55 tunnels and over almost 200 bridges; a journey so beautiful that part of the line is recognised as a UNESCO World Heritage site.

Taking roughly two hours, the journey between Chur, Switzerland's oldest town, and pretty Tirano in Italy was designed as a scenic tourist route. As you pass by some of the line's most spectacular features, you can discover more about your surroundings with the informative English commentary. Make sure you keep an eye out of the panoramic windows, too - the stunning mountain views offered up throughout the 76-mile journey are some of the best you'll ever having the pleasure of seeing.

Luxury in the Alps 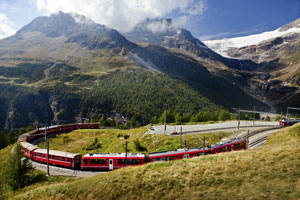 Perhaps the most famous town on the Bernina Line is chic St. Moritz, a world-renowned Alpine resort town. Known as the birthplace of Alpine winter holidays, St. Moritz owes its fame to an 1864 bet. Hotelier Caspar Badrutt bet his unconvinced English guests that St Moritz was equally pleasant to visit in winter as it was in summer. So, he invited them to stay at his resort over Christmas - guaranteeing that he would pay their return travel expenses if they didn't enjoy themselves. They ended up staying until the next Easter, and thus began the trend for a seasonal St Moritz holiday.

The highest summit in the eastern Alps, St Moritz is known for attracting well-off and fashionable clientele. Its popularity is somewhat thanks to the 300 days of sunshine it receives a year, as well as its perfect winter sports conditions. Nearby is the famous Cresta Run toboggan course, and every winter St Moritz hosts the 'White Turf' horse race, which is run on a track set up on the frozen lake and attracts the international elite.

Not to be missed 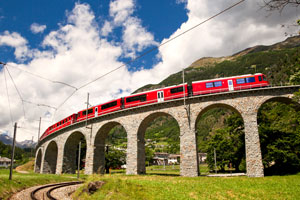 There are many visual highlights to be enjoyed on the Bernina Express. Soon after the train leaves Tirano headed for Switzerland, get ready to climb the Brusio Spiral Viaduct, a famous 360-degree spiral piece of track used to help the train gain height. Opened in 1908, The Brusio Spiral Viaduct was designed to limit the railway's gradient between Tirano and Poschiavo. Without the gradient change, it was feared the train would slip on the way up the slope or lose control on the way down. A spiral tunnel was initially planned at the location, but couldn't be built due to geographical restrictions. Considered an excellent place for photographs, have your camera at the ready as you journey through this outstanding feature.

Equally stunning is the iconic Landwasser Viaduct. This incredible single-track railway viaduct spans the Landwasser River in Switzerland. The Bernina Express crosses here between Schmitten and Fillisur, and the views through the valley are nothing short of magnificent. Shortly after Fillisur the train passes through several spiral loops to gain height as it ascends into the Alps. The highest station on the Bernina line, Ospizo Nernina is perched 7,391 feet above sea level, and the vantage point from the train offers awe-inspiring mountain vistas.

Travelling through culture-rich towns and villages and offering breathtaking Alpine views, this really is one of the world's most wonderful rail journeys. Uncover the spectacular beauty of the Bernina Express for yourself on selected rail holidays to Italy and Switzerland with Rail Discoveries.

Explore the charms of this unchanging coastal destination, with an insider view of one of our most popular holidays: Yorkshire by Steam.

The trains of the future

Welcome to the future! Please leave your slow trains, your outdated tickets and your rackety old carriages at the door.

Pizza of the World

The bastion of the takeaway world, loved by food snobs and the uncaring alike, pizza is (in my humble opinion), the best possible food to eat at anytime, anywhere.