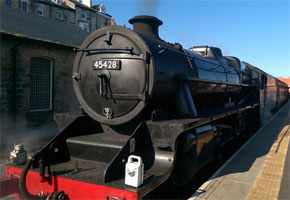 "Don't stick your head out of the window. You'll get soot on your face."

Wise words from a Tour Manager I had met weeks earlier when exhibiting at the Women's Institute Centennial Fair in Harrogate, and aside from coal dust and rhythmic chug of a heritage engine, I had no clue what to expect from a journey on the steam-hauled North Yorkshire Moors Railway. If I'm honest, I also didn't know what all the fuss was about; combustion engines and steam power are hardly new inventions, and despite attempts of persuasion, I've never been a fan of Fred Dibnah.

Yet, back in Harrogate again, I woke to a frosty morning, and a tingle of undeniable excitement. The town was dark outside my window, but the night had been restful.  It was 6am, but my sleepy colleagues and co-passengers were jovial, and our Tour Manager Graham practically buoyant, as he bobbed around the breakfast room assuring that every member of our party was ready for the adventure ahead. His enthusiasm was contagious; by the time we left, I was filled with anticipation. I hadn't visited Whitby since childhood, and I was now eager to see the delightful town again.

The sky had brightened and become a grey mist, as we exited our coach at Pickering station, the first stop on the North Yorkshire Moors Railway. A charming preface to the journey ahead, the station remains an object of a bygone era: the vintage signs, shiny tiled walls and conductors with whistles and smart blue hats all spoke to a different time. As we waited to board the heritage carriages of our train - wood-clad and lined with cosy seats upholstered with comfort in mind - I read the posters advertising the importance of housing evacuee children. Standing on the platform in an orange jumper and a walking boots, I felt strangely anachronistic; I needed a smart hat of my own. 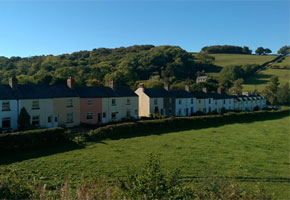 Seated comfortably on board the train in our own dedicated Rail Discoveries compartment, the journey began with a history lesson. Delivered by a well-dressed conductor, we listened intently, as he gestured with his travel mug of tea, and recounted the tale of the railway's inception. His short but informative talk was swiftly followed by the arrival of the drinks trolley, and with a steaming cup of hot chocolate to warm up with, I watched the country views roll slowly by my window. The distinct chug of the train was enchanting; as puffs of smoke drifted past, I felt captivated by our slow but steady motion. Pulled along by the power of steam, we rattled through the quiet countryside towards the coast. 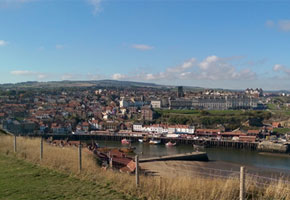 With its legacy of Gothic horror, the iconic whale bone arch that looms over the town, and its position on the North Yorkshire coast, you could be forgiven for thinking of Whitby as a dreary, moody place enveloped by fog and myth - but the truth couldn't be further. A delightful and vibrant seaside town, Whitby boasts fresh air, steep yet rewarding walks up its craggy clifftop lanes, and an abundance of charming sea-front eateries. Eager to work up an appetite for local fare, I decided a stroll was in order, and set off up the 199 steps, for grand views across the bay.

It was as glorious as my memories made out. At age 11, I had stood on the same spot, wind billowing out my jacket, taking in the smell of the sea and the cries of gulls circling the harbour. In the bright September sunshine, Whitby looked the same as when I'd seen it last.

Strolling back through the town, I passed another solid memory. A stone's throw from the base of the 199 steps, surrounded by tea shops and jewellery stores, is the fascinating Whitby Jet Museum. Detailing the history and use of jet, the museum provides an extraordinary insight into the town's history with the black, semi-precious stone - one I had experienced on a school trip, some fifteen years before. I paused to talk to the owner, who was taking a tea break on the museum's front step. He smiled when I described the school trip. Having owned and run the museum for 30 years, he had given countless tours and demonstrations - including, no doubt, the one I still fondly recall. I left him to his tea, warmed by the thought that in this town, not a lot changes - and that's probably a good thing.

Walking back through the unchanged streets, it felt that Whitby, like Pickering station, was a safe harbour for tradition, a place where the past thrived, and where history waited to be revisited. Just as keeping the steam trains running preserves a living legacy, so this quaint little seaside town manages to preserve its heritage through the years - and with it, the many memories of its visitors.

Where to go in October

As the summer weather starts to get a bit shaky and we regret ever complaining about the heatwave, you’d start to think about perhaps extending your summer with another holiday next season.

What do the Changi prison in Singapore, the concentration camps of Poland, the wastelands of Chernobyl and the site of Ground Zero in New York have in common? Well, each one is a choice and enthralling destination in the eyes of one controversial and morbid arm of the international travel industry.