Tigers, the Taj Mahal and Mumbai

The whole experience was more than I expected.
Anonymous
view more
Image gallery 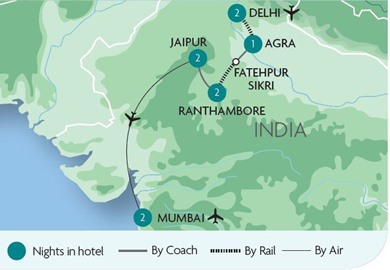 Arrive at the airport today where your tour begins with a scheduled flight from London Heathrow to Delhi. Arriving early on Day 2, your are greeted by your local Indian Tour Manager who escorts you to your hotel, the 5* Crowne Plaza Okhla. Enjoy the rest of the day to acclimatise, with dinner provided at the hotel today.

Discover the charms of Old and New Delhi today, on a full-day guided sightseeing tour. India's vibrant capital is alive with kaleidoscopic colours and a heady blend of modern, colonial and ancient architecture, providing a fascinating insight into the country's long history.

As you tour the city's highlights, take in iconic sights including the Red Fort, India Gate and the President's House, as well as taking a rickshaw ride through Old Delhi - an authentic way to experience this bustling city.

Agra and the Taj Mahal

Today you board India's first semi-high speed train, for a journey to Agra on the new Gatimaan Express. Agra is a former capital of the Mughal Empire, and is famed worldwide for its fantastic ancient architecture, much of which has UNESCO World Heritage status.

After settling in at your hotel, you take a tour of the city, with a visit to two of its bestknown attractions: the imposing Agra Fort, and the incredible Taj Mahal. Constructed from pearlescent white marble and decorated with precious stones, this iconic structure is actually a mausoleum dedicated to Mumtaz Mahal, the beloved queen of Emperor Shah Jahan, and dates back to the 17th century. Admire the intricate calligraphy carvings of poems and scripture from the Quran on your visit to one of the Seven Wonders of the World.

Transfer to the short-lived ancient capital of India, Fatehpur Sikri, for a sightseeing tour this morning. Abandoned after only 15 years due to a dwindling water supply, the city remains beautifully preserved to this day. This afternoon, head off to Ranthambore on the Shatabdi Express train, checking in on arrival to the Abhyaran Ranthambore Resort.

Enjoy a highlight of your tour today, with two game drives in Ranthambore National Park. Considered to be the best park in India for spotting the elusive tiger, the sanctuary is also home to over 300 species of birds, as well as providing a home for crocodiles, deer and monkeys.

Many other rare creatures can also be found here, including leopards, panthers, hyenas, and even sloth bears. Look out for the park's incredible range of wildlife, as you explore the park on both morning and afternoon game drives, increasing your chance of a tiger sighting.

Transfer by coach to Jaipur, India's 'Pink City' today, checking in to your hotel on arrival. On Day 8, explore the city on a guided sightseeing tour.

The capital of Rajasthan, Jaipur was founded in 1727, and is famed for an array of striking sights, including the impressive Amber Fort, known for its artistic Hindu elements, and the Palace of the Winds, whose ornate façade once disguised the presence of courtly ladies who did not wish to appear in public - both of which you visit on your tour.

Leave Jaipur behind today, on an internal flight to Mumbai, on India's west coast. India's financial capital, Mumbai has been a gateway to India since 1869, when the Suez Canal was opened, kick-starting a growing spice trade route with the Mediterranean. On arrival, you check in to the 5* Trident Nariman Point, a beautiful hotel set within a lovely green area. Later enjoy a complimentary cooking demonstration before dinner.

Enjoy a full day to discover the treasures of Mumbai today, with a guided sightseeing tour. Your tour includes the Chhatrapati Shivaji Terminus - a UNESCO World Heritage site, this still-active railway station dates back to 1887, and is a fantastic example of Victorian Gothic architecture.

Later, take in sites from India's political past, with a visit to Mani Bhavan - Gandhi's former home - and delve into local culture with a visit to Dhobi Ghat, a 140-year-old open air laundromat, where clothing has been traditionally laundered for centuries. Your tour also includes entrance to the Prince of Wales Museum, now known as the 'Chhatrapati Shivaji Maharaj Vastu Sangrahalaya.' Set in a heritage building from the early 20th century, the museum was used temporarily as a military hospital, but now serves its original purpose, displaying a variety of ancient artefacts from the Far East, including items from India, Nepal and Tibet.

Leave India behind after breakfast today. Transfer to Mumbai airport, for your scheduled flight to London Heathrow. On arrival, your tour concludes.

Famous for its pristine sandy beaches and relaxed way of life, you will be spending your tour extension in southern Goa, right beside the Arabian Sea. This corner of India is celebrated for offering visitors an authentic glimpse into a country that will deliver a true sense of serenity. During your extension you will spend 4 nights at the 5* Park Hyatt Hotel, enjoying a delicious breakfast every morning. Also included are all your internal flights, transfers and return flight to the U.K.