The Highlands by Steam

Discover the beauty of Scotland by rail

Experience vibrant Edinburgh before exploring the lochs, mountains and glens of Perthshire and the Cairngorms on Scotland's spectacular railways. 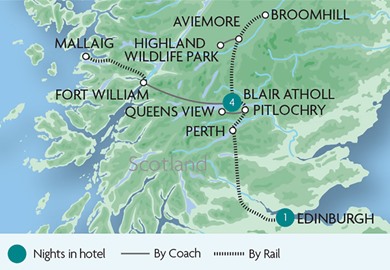 The Highlands by Steam 2020Tour Details

Your Tour Manager greets you in Edinburgh at the Ibis Edinburgh Royal Mile or South Bridge and you are free for the rest of the day to explore this historic city.

There are a myriad of things to do in exciting Edinburgh. The Royal Mile is located right in the middle of the colourful Old Town, and runs between Edinburgh Castle, perched imposingly atop an extinct volcano, and Hollyrood Palace, the official residence of Queen Elizabeth when she is in Scotland. For those who are feeling energetic, why not climb up to the top of Arthur's Seat? From here, there are amazing views of the entirety of Edinburgh and the Firth of Forth beyond.

Edinburgh with a Guided Tour

Discover Scotland's thriving capital with a guided walking tour this morning. In the afternoon you will travel through scenic Perthshire to Blair Atholl for four nights at the Atholl Arms Hotel.

Spend your afternoon at leisure, exploring this village situated at the confluence of the Rivers Tilt and Garry.

Today's excursion takes you to Queen's View, one of Scotland's most famous lookouts, where you can enjoy the stunning panorama stretching out across Loch Tummel to the Glencoe hills. The view from here is idyllic, and looking out over the verdant countryside, predominantly untouched by humans, it is easy to lose yourself in the calm beauty of Scotland. The walks in the area are quite popular, made more special by views of the towering Schiehallion or the 'fairy hill of the Caledonians', also often referred to as the 'Matterhorn of Perthshire' by tourists and locals alike.

Spend lunchtime in one of Perthshire's main tourist destinations, Pitlochry, with the scenic backdrop of Ben Vrackie rising up 2,757 feet in the background, before enjoying a guided tour of Blair Castle and gardens.

Blair Castle is one of Scotland's premier stately homes, and the last castle in the British Isles to be besieged during the last Jacobite rising. The Duke of Atholl is the only person in the United Kingdom who is allowed to raise a personal army. Known as the Atholl Highlanders, this army is considered to be the gatekeepers of the Highlands, today only being called to action at social and ceremonial events. The gardens of the castle are exquisite, and the rooms inside are perfect examples of Scottish interior design through the ages - including one room which is covered in antlers. Recently, the castle has been used as a filming location for the ITV series 'Victoria'. The rest of your afternoon and evening are free for you to relax or discover more of the area.

Join the Jacobite Steam Train* in Fort William for a magnificent return journey on the West Highland Line in restored carriages. The incredible West Highland Line is regularly voted as one of the most scenic railway lines in the world One of the most famous sights that the train passes crosses over is the famous Glenfinnan Viaduct, an utter marvel of engineering with 21 spans that harmonise perfectly with the surrounding rolling countryside. Of course, this viaduct has been used in numerous films, the most famous and recent being in the second 'Harry Potter' film.

After crossing the viaduct, the train continues onward towards the coast, unveiling incredible views of this wild and wonderful corner of the world. After passing through Arisaig, the line then descends towards Mallaig, a sweet fishing port that looks out over to the Isle of Skye.

*Please note: Steam-hauled where possible - some departures use the ScotRail scheduled service

Take a spectacular trip on the Strathspey Steam Railway today. Travelling through the Cairngorms from Aviemore, follow the route of the historic Highland Railway. This line is arguably one of the most beautiful in Scotland, with the spectacular scenery of the Cairngorm National Park surrounding you on all sides.

As you travel through the countryside, pass dense pine forests, heathery moors, and the lush green stretches of the golf courses Scotland is known for. On one section, the line follows the route of the River Spey. The turning point is at Broomhill station, which should be recognisable as the station of 'Glenbogle' in the television series 'Monarch of the Glen'.

After this nostalgic rail journey, continue by coach to the Highland Wildlife Park. Operated by the Royal Zoological Society of Scotland, it boasts a diverse range of wildlife in an incredible Highland setting. Enjoy a fascinating guided drive around the park and time at leisure to discover the animals found here. This park is home to native Scottish species as well as rare and endangered animals from around the world including polar bears, tigers, wolves, and snow leopards.

Bid farewell to the breathtaking highlands of Scotland, and return by train to Edinburgh where your tour concludes

What our customers think
86%

based on 4 verified reviews

Everything was well organized, a great tour manager and excellent transportation.

Good holiday David was great,couple of train journey very crowded. Over all a good holiday. Have already booked a holiday with rail discovery for next year.

Very good holiday, but top mark not achievable as description of coach journey between Blair Atholl and Fort William as short (almost 2 hours each way) stretches the imagination!

Very well organized holiday, enjoyable trips and hotels very good. Tour manager went out of his way to make sure everyone enjoyed the trip.

2 early starts - would have been helpful to know earlier. Repeated paperwork unnecessary

Everything was good and our room in the hotel was beautiful, but we were travelling with relations who had a pokey little room in the attic! If we are paying the same money should we not have similar standard of accommodation? If we had been put together it might not have noticed!

Five of Britain’s best steam train journeys
Doorstep discoveries
The Trains of the Literary World
Why spontaneous travel is so liberating, and where to go
Helen
Luke