Huskies and the Northern Lights

You are viewing the 2021 itinerary

Explore the mysterious Arctic and discover the magic of Norway and Sweden as husky dogs lead you through the snow, you chase the incomparable Northern Lights, and ride the most northerly railway in the world. 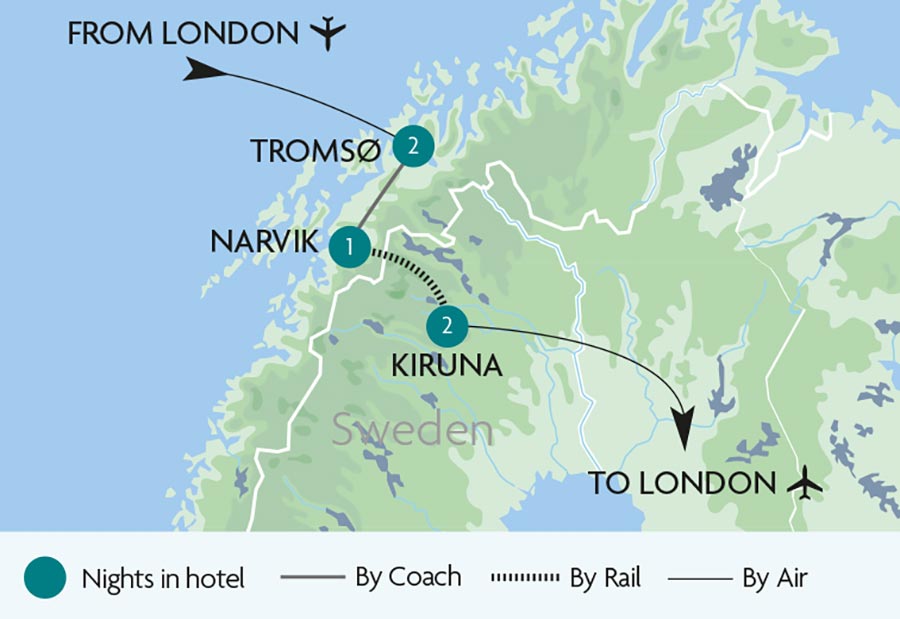 Your journey to the Arctic begins at London Heathrow, as you meet your Tour Manager ahead of your flight to Oslo. In the Norwegian capital, connect with your onward flight to Tromsø. Situated far in the Arctic Circle, Tromsø stands on its own forest-covered island and is known as the 'polar capital of Norway' due to its relative proximity to the North Pole. At this time of the year, the attractive city is characterised by its polar nights, where the sun only briefly breaks over the horizon, casting a low light across the charming, brightly-coloured buildings.

On arrival, transfer to the Clarion Edge Hotel, where you spend the next 2 nights. You are then free to begin your explorations of Tromsø. The city has a rich history and plays an exciting role as the starting point for many polar expeditions It also played a key role during the Second World War, acting for a brief period as Norway's capital.

Discover more of Tromsø on this morning's guided sightseeing tour. Highlights include the Arctic Cathedral, a distinctive white building that looks out across the city and fjords. You also visit the Polaria Museum and the charming Polar Museum. Housed in the city's former Customs House on the quayside, this interesting museum tells the story of numerous polar expeditions that took place from Tromsø, as well as giving an insight into the hardy wildlife that populates this region.

This evening, enjoy an authentic and fascinating 'Sami experience' in a nearby village, and discover the lives and culture of Norway's indigenous people. During the visit you meet reindeer before a wilderness dinner in a 'lavvu' tent. During the meal, you are regaled with local folk tales. Then, spread out around the campfire, to try and view the captivating Northern Lights - the world's most spectacular natural phenomenon. Officially called Aurora Borealis, seeing this natural phenomenon performs its dance across the night sky is a truly once-in-alifetime experience, and you hopefully catch a glimpse of them this evening.

Depart from Tromsø and drive to Narvik for a journey full of Norway's dramatic scenery; ranging from steep valleys to striking fjords. On arrival, check into the Thon Hotel Narvik, before an afternoon at leisure in this delightful city. You might like to visit the Red Cross War Memorial Museum, which documents the occupation of Narvik and the bitter air and sea battles that took place here during the Second World War. Narvik was considered to be an important strategic outpost that not only boasted a port, but also supplies of coveted iron ore. The Ofoten Museum is also worth a visit. This museum is rich with exhibits documenting the life of Narvik's inhabitants over the previous centuries. This evening, head out with a local guide through the region around Narvik, attempting to track down the Northern Lights.

Enjoy a wonderful journey on the Ofoten Railway today, sometimes also known as the Arctic Circle Express. This line, which at the time of construction was the most northerly railway in the world, travels through the wild and beautiful landscapes of Lapland, passing breathtaking mountains, crossing barren plateaus, and traversing steep mountainsides as it crosses into Sweden. On arrival in Kiruna, check into the Scandic Hotel Ferrum for a 2-night stay and enjoy a free afternoon to explore. Perhaps visit Kiruna Church, built in 1912, is particularly impressive and is one of Sweden's largest wooden buildings.

This morning, travel out to a nearby husky camp for a memorable experience. After seeing these powerful creatures put through their paces, learn about their environment and how they adapt through training. Later - dressed in a cold weather suit - experience these tireless creatures at work, as you enjoy a thrilling husky-hauled sled journey through the snowcovered countryside.

This afternoon, make a visit to Kiruna's famous Ice Hotel, the first and largest hotel made of ice and snow in the world. At the latest count there have been 29 versions of this building since the first iteration in 1990. The Kiruna Ice Hotel needs to be re-constructed at the beginning of each cold season, and on arrival you enjoy a guided tour of the spectacular frozen structure. After your tour enjoy a drink in the ice bar, where everything, including the glasses, is made from ice. There is also a chance to wander through the icy halls and marvel at the impressive feats of architectural design.

Tonight you attempt to spot the Northern Lights once again. Your location is one of the world's best places to see the lights, so hopefully a clear night will permit a good sighting of this breathtaking natural wonder

Bid Kiruna farewell as you transfer to the airport, flying via Stockholm to London Heathrow, where your holiday comes to an end.

The comfort of a big, warm hygge
The transforming magic of a special event
Discover Sweden
Top 5 places to see the Northern Lights
Luke
Helen

View our range of festive holidays, winter adventures, and seasonal tours in the UK and Europe.