Jugendstil. Bless you? (No, that's Gesundheit…) Jugendstil, as I found out on our Vienna, Prague and Berlin tour, is the German word (meaning 'Youth Style') for the Art Nouveau movement that was most popular from 1890 to 1910.

During this period a new artistic style developed that embraced art, architecture, graphics and notably the decorative arts. Spreading from Paris across a variety of European countries including Austria, Germany, Spain and even the UK (remember Charles Rennie Mackintosh) - it was characterised by stylised natural forms such as leaves and flowers, curved lines and sometimes geometric patterns.

Great examples can be seen in the three cities on this tour and a lot of them are free! So after enjoying the guided tour included in the itinerary, why not take some time to investigate some of these attractive artworks and buildings, with handy stops at café's or konditorei to keep you going on the way.

Central to the Jugendstil movement in Vienna was Gustav Klimt, a painter and president of the 'Secession' group of artists. The finest collection of his works (including 'The Kiss') is located in the Upper Belvedere, one of two palaces that formed the summer residence of Prince Eugene of Savoy. Other artists in the gallery include Egon Schiele and Oskar Kokoschka and the top floors have great views of Vienna. The extensive grounds include ornamental lakes and gardens as well as the Lower Belvedere and Orangery - used for temporary art exhibitions.

In terms of architecture, a walk around Vienna's streets can bring you a wealth of options including Otto Wagner's Apartments (near Naschmarkt) and the Karlsplatz Pavilions (part of his design for Vienna's underground system). One pavilion houses a small museum of the architect's work (there is a bigger one at his famous Postsparkasse building) - the other is a café. Nearby is the Secession building, a white block style building crowned by a dome of gilt laurel leaves. Designed by Joseph Maria Olbrich to house exhibitions of the Secession artists, it includes Klimt's 'Beethoven Frieze' designed in 1902. 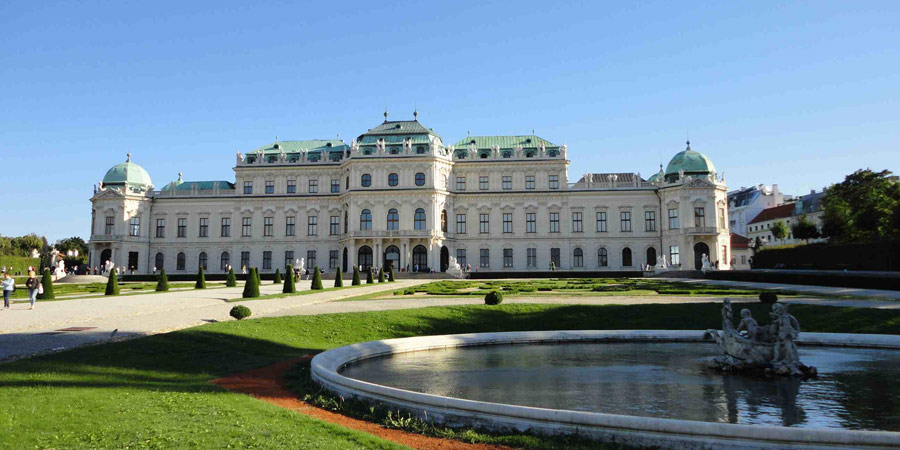 Whilst visiting Prague, arguably the best example of art nouveau architecture is the Municipal House (Obecní dům). You can admire the exterior from  Republic Square, take a guided tour of the interior (offered in Czech and English) or attend a concert in the main Smetana Hall. After viewing the outside, I stopped for a snack in the café (Kavárna Obecní dům) - a splendid high-ceilinged room with ornate chandeliers (there are also two restaurants & bar).

Other notable café's are the Café Louvre, meeting place for many writers, artists and philosophers, including Franz Kafka and Albert Einstein and the Cubist Café: 'Grand Café Orient', not far from the Powder Tower.

Alphonse Mucha was the leading Czech artist in the art nouveau movement, and became famous for his posters promoting the Parisian plays of Sarah Bernhardt. In the Prague Castle area, you can see his stained glass window in St. Vitus Cathedral. In the city centre (near Můstek metro stop) there is also a museum devoted to his work.

Slightly off the beaten track (four metro stops from the old town) are the art nouveau interiors of the neo-gothic Church of St. Peter and Paul at Vyšherad fortress. All the walls, pillars and ceilings are painted and include colourful designs and portraits of local saints. Also, don't miss the adjacent cemetery opened in 1869, the final resting place of many famous Czechs, such as the composer Antonin Dvorak (Mucha, the artist mentioned above is also buried there).

And if all that is not enough, at Prague Hlavni Nadrazi station when you arrive or leave, make sure you pass the old station's entrance hall - with a domed ceiling and art nouveau designs.

Berlin isn't particularly associated with art nouveau as an architectural style (its centre was Munich), however there is a hidden gem that contrasts with all the more formal buildings and monuments in the city.

This is the Hackesche Höfe, a complex of eight interconnected courtyards designed by the art nouveau artist and architect August Endell. Located near the S-Bahn station at Hackescher Markt, the complex was typical of the 1900s where residential homes, factories and offices were combined in one area.  The first courtyard (quite busy with cafes and restaurants) had perhaps the best façade with striking blue and white ceramic tiles. Subsequent courtyards (hof) are more tranquil and include a range of artisan shops, boutiques and galleries. The entrance is easily overlooked (accessed through a building archway at the beginning of Rosenthaler Strasse), but was well worth a visit.

Explore the charms of this unchanging coastal destination, with an insider view of one of our most popular holidays: Yorkshire by Steam.

Our wonderful Tour Manager recounts his fascinating walk through the Jungfrau region of Switzerland’s majestic mountain range, through snowy panoramas, from Murren to Grutshalp.

What do the Changi prison in Singapore, the concentration camps of Poland, the wastelands of Chernobyl and the site of Ground Zero in New York have in common? Well, each one is a choice and enthralling destination in the eyes of one controversial and morbid arm of the international travel industry.