All about the Edinburgh Tattoo

Dating back to 1949, the Edinburgh Military Tattoo has evolved into a dynamic and world-renowned event. Featuring in the show are highland dancers, live music and performances from international army regiments. The Edinburgh Tattoo always proves to be an unforgettable performance, and one not to be missed on train holidays in Scotland.

For over half a century, the Edinburgh Tattoo has been delighting and entertaining audiences with its traditional military performance. More than fourteen million people have attended the tattoo, and over 220, 000 attend each year. The display includes drums and traditional Scottish bagpipes, along with more modern aspects of the armed service. Performed by the British Armed Forces, Commonwealth and international military bands, it forms part of the wider Edinburgh Festival.

The Edinburgh Tattoo runs throughout August every year, and in 2014 celebrated its sixteenth successive sell out year. Drawing crowds from all over the world and set in the grounds of EdinburghCastle, the tattoo has helped the castle become Scotland's most visited attraction. 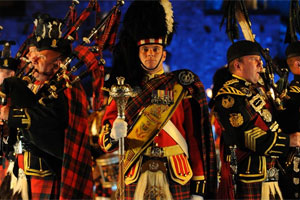 The name 'tattoo' derives from a 17th century Dutch phrase, 'Doe den tap toe' ('turn off the taps'), first encountered by the British Army serving in Flanders. The Dutch States Army had become a federal army and was mostly made up of Scottish, English, German and Swiss troops, although still commanded by the Dutch. Military drummers, or sometimes trumpeters, would be sent out to the nearby towns each evening to signal it was time for the soldiers to return to their barracks. The ritual was called 'doe den tap toe' as a signal to the inn keepers near military garrisons to stop serving beer. The drummers would continue to play for half an hour until the final curfew. The name 'tattoo' developed from earlier versions of 'tap-too' and 'taptoo'.

The first military tattoo in Edinburgh was held in 1949, and took place in PrincesStreetGardens. The next year, in 1950, the first official Edinburgh Royal Military Tattoo was held in front of the Edinburgh Castle. The event drew six thousand spectators who were seated in simple structures around the castle. The capacity of the stands was expanded in 1952 to allow for an audience of almost eight thousand each night. In 2011, the spectator stands were upgraded to allow a greater number of visitors each night, as the popularity of the tattoo continues to grow.

The tattoo has developed over the years into more of a show, which includes the playing of the first post, at 21:30, when the original drummers would have set out towards the inns. Also included is the last post, at 22:00, which was the original soldiers' curfew, and when the drums would have stopped in the 17th century. Tattoo's became commonplace in the 19th century, with most military garrisons holding displays during the summer conducted by searchlight or floodlight. The military tattoo grew more elaborate over the years, and now involves aspects like Highland dancers, massed bands and fireworks alongside the military pipes and drums. Today the performance is sleek, well-rehearsed and executed with military precision. 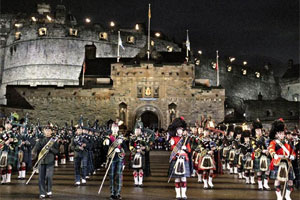 Each year the tattoo takes place every weekday throughout August, and twice on Saturdays. There is also a shorter, free performance held in the PrincesStreetGardens, entitled, 'A taste of the tattoo', this is also performed in Glasgow's George Square. The Royal Edinburgh Military Tattoo also performs internationally; the tattoo is also televised annually by the BBC, and watched by 100 million people all over the world every year.

The Royal Edinburgh Military Tattoo is run for charitable purposes, and has donated over £5 million through the years to funds such as the Army Benevolent Fund. It is also estimated that Edinburgh's economy benefits from around £88 million each year thanks to the tattoo. In 2010, HRH Queen Elizabeth granted the spectacle a Royal title in celebration of sixty years of performing, and it is now known as the Royal Edinburgh Military Tattoo.

The Royal Edinburgh Military Tattoo is truly an international event, to date over thirty countries have performed, including African tribes. The spectacle is world famous, drawing up to 70% of its audience from outside Scotland. Edinburgh during the summer months is alive with activity, making it the perfect place to visit on UK train holidays. And no train holidays to Scotland are complete without seeing the Royal Edinburgh Military Tattoo.

Rail Discoveries offer the chance to fully experience the tattoo on escorted rail tours to Scotland.

The cities of southern India

The breath taking and rippling beauty of splendid Southern India seeps into every aspect of this magnificent corner of the world.

Around the world on St Patrick’s Day

Every year, on the 17th March, Irish citizens and descendants from all around the world gather to honour St Patrick, arguably the most celebrated patron saint in the western world.

On the first of our series discovering the great lakes of Europe, we visit the beautiful blue-green waters of the Plitvice Lakes in Croatia. Explore incredible wildlife, stunning scenery, and a rich history where waterfalls meet spaghetti westerns.

On the afternoon of January 22nd, 1879, 4,000 Zulu warriors launched an attack on Rorke's Drift on the battlefields of KwaZulu-Natal, South Africa.