Discover the railways of Ellan Vannin

Ellan Vannin - probably better known as The Isle of Man - is home to some beautiful Victorian railways seemingly frozen in time. Take a journey on the Victorian steam railway, which still runs with its original locomotive and carriages dating back to 1874. Or explore the Snaefell Mountain Railway in all its Victorian charm. Ellan Vannin is a wonderful place to experience some beautiful journeys surrounded by history.

Nestled between the UK and Ireland in the Irish Sea, the Isle of Man is surprisingly not part of the UK. Instead, like the Channel Islands, Jersey and Guernsey, the Isle of Man is a Crown Dependency. This means they're self-governing, and free to make their own laws. The island has its own currency, which still includes the one pound note, and also its own language. The island is home to the oldest continuous parliament in the world, which can be traced back to 979CE.

Take a look at our run-through of the railways of Ellan Vannin and discover where history and beauty meet. 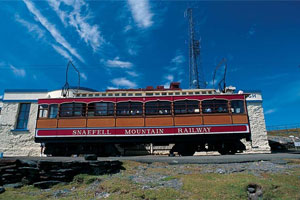 Snaefell, on a clear day, is the only place in the British Isles where you can see England, Ireland, Scotland and Wales from the same spot. The summit of the only mountain on the Isle of Man can be reached on the Snaefell Mountain Railway. Built in 1895, the line still runs most of its original Victorian rolling stock, and is the only electric mountain railway in the British Isles. The route operates regularly between April and September and a one way journey takes roughly half an hour.

The Isle of Man Steam Railway 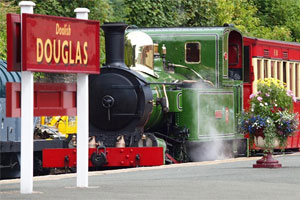 Make the most of your visit to Ellan Vannin by taking a journey on the Isle of Man Steam Railway. Like the Snaefell Mountain Railway the line runs its original rolling stock, and was opened in 1874. It's also the longest narrow gauge steam line in Britain. Although it used to be part of a larger steam railway network on the island, today steam train trips on the line runs from the capital to a variety of locations on the south of the island.

The historic Manx Electric Railway has been running since 1839. The journey takes travellers up the east coast of the island and still operates much of its original Victorian and Edwardian rolling stock. The electric tramline connects Douglas, Laxey and Ramsey, it also connects with the Snaefell Mountain Railway at Laxey. The journey takes travellers on a scenic tour of the island, passing through some incredibly beautiful landscapes. The narrow gauge railway line stretches over seventeen miles, with over sixty official stations - or more accurately, stops as a number of these are simply footpaths across the railway. Many of the original station buildings survive, although they've been modified through the years.

For those wanting to make the most of rail tours on the Isle of Man, the island can be navigated from its southern tip to its most northerly tip exclusively using the three beautiful heritage railways. Beginning at Port Erin on the south of the island, the Isle of Man Steam Railway runs up the east coast to Douglas. From Douglas travellers can catch the Manx Electric Railway. At Laxey, alight the electric railway and catch the Snaefell Mountain Railway to the summit of the only mountain on the island. Travel back to Laxey and you can then switch back to the Manx Electric Railway to continue the journey up to Ramsey in the North.

The travel awards season will soon be upon us, and even though nothing has been announced yet, Rail Discoveries already has something to celebrate.

Hospital Trains throughout the ages

What can be said about trains? They're fast, efficient, fairly stable modes of transport. Fantastic for commuting or transporting lots of heavy goods, and great at getting people to the heart of a destination with a fairly small amount of fuss furore.

The Trains of the Literary World

Literature and rail travel have always been intrinsically linked in some manner or other. A good book has alleviated even the most mundane rail journey.

On our second foray into the environs of Europe’s great lakes, we experience the profound natural theatre of the Austrian Lake District, taking in some of its storybook locations.