Near to the Yorkshire market town of Skipton, the village of Bolton Abbey forms part of an historic 30,000-acre country estate; an area of outstanding beauty comprising woodlands and-heather clad moors through which the River Wharfe runs.

The estate, listed in the Domesday Book, belonged in the eleventh century to Edwin, Earl of Mercia, but following the Norman Conquest was ceded to French nobleman Robert de Romille, whose family owned it until their line ended in the fourteenth century. King Edward II bestowed Bolton Abbey upon English soldier Robert de Clifford. By marriage the estate became the property of the Duke of Devonshire in the eighteenth century and is currently owned by the twelfth Duke.

The centrepiece of Bolton Abbey is its ruined Augustinian monastery, Bolton Priory, which stands beside the village. Established in 1154, this magnificent Gothic building remained in service until King Henry VIII's dissolution of monasteries in 1539. All but the nave of Bolton Priory - now the village's Parish Church - was abandoned. Stripped of its lead roof, its stonework exposed to the elements, the priory gradually fell to ruins.

Today, Bolton Abbey's visitors can enjoy eighty miles of walking trails through spectacular countryside; explore the abbey, church and a medieval hunting lodge; fish for trout in the river and meet the estate's traditional wood craftsman known, historically, as a 'bodger'.

Bolton Abbey boasts a new and award-winning railway station which connects it with the historic station, built in 1888, at the nearby village of Embay. A fifteen-minute journey aboard beautifully-restored Victorian steam trains transports visitors through some of Wharfedale's most beautiful scenery. Both stations provide a gift shop, refreshments and picturesque picnic areas. 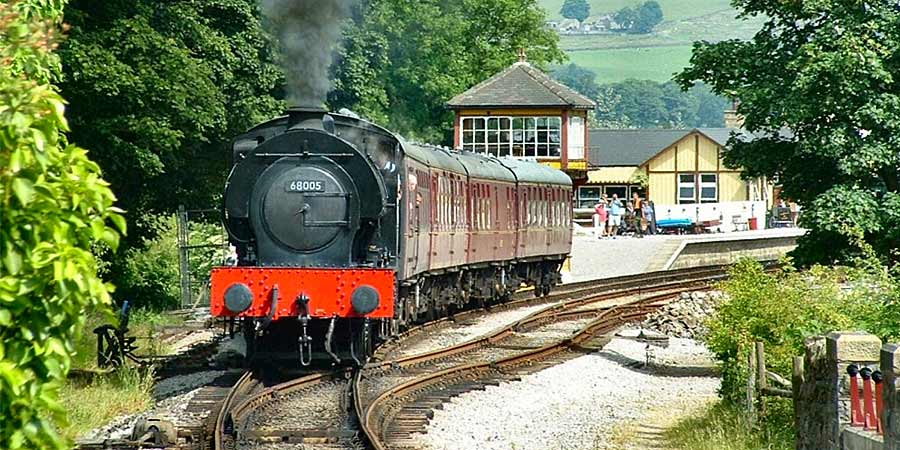 This magnificent oak tree on the Bolton Abbey estate is more than eight hundred years old and is believed to have been named after the John of Laund who was the Abbey's prior between 1286 and 1330.

Taking its name from the Anglo-Saxon word stryth which means 'turmoil', the Strid is a scenic gorge in which the River Wharfe becomes a deep, narrow channel and powerfully churns the water in spectacular fashion. The Strid is particularly beautiful In springtime when the surrounding meadows are carpeted with bluebells.

In the centuries before a bridge was built, the only way to cross the River Wharfe to and from Bolton Priory was by a series of fifty-seven stepping stones that traverse the water. They remain today, but the wider spacing of the stones at the river's centre provides a test of nerve.

Out and about in North Yorkshire

Beautiful countryside, lively cities, and friendly people, it’s really no wonder that Yorkshire is known as ‘God’s Own County’.

At Christmas time, pantries across the world are stocked to the brim with festive goodies, the snow drizzled huts of Christmas markets are loaded with all manner of tastes and smells, and the tables of every house are loaded with delicious joy.

Why you should consider a Christmas holiday

We think a holiday at Christmas is one of the only true ways to find yourself some peace on earth, and there’s so much people are missing out on when they choose to holiday only in summer.