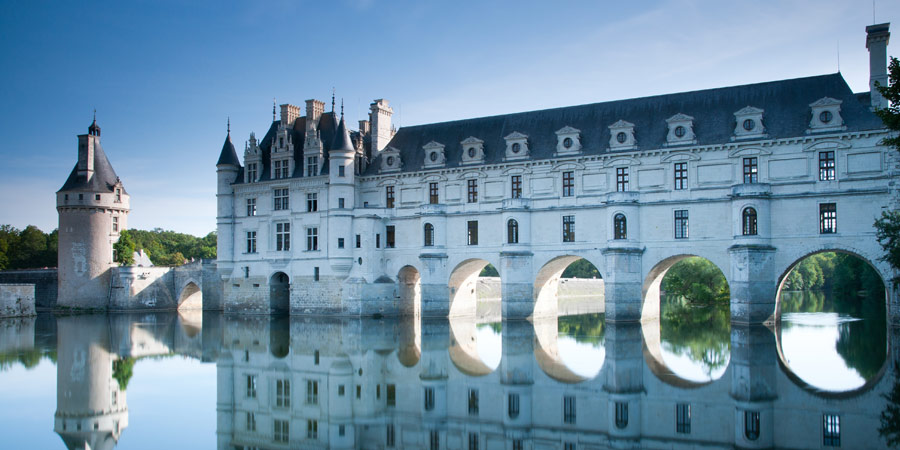 Save £300 per person on selected cabin upgrades when you book on or before 7th April 2020 -  if booking online discount will be applied post booking.

An all inclusive barge cruise through the scenic loire valley

Cruise serenely along the idyllic waterways of the Loire Valley and take in the historic towns and villages that have grown prosperous on the bounty of the region's world-class wine trade. This tour is operated by our sister company Great Rail Journeys. 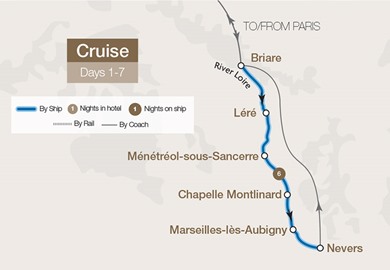 Our journey begins at our dedicated Departure Office in London St Pancras, where you meet your Tour Manager before boarding the Eurostar service to Paris. From here, transfer to your barge, The Deborah, at Briare. After meeting the crew, enjoy dinner on board, cruising through the Briare Aqueduct. The aqueduct was once the longest navigable aqueduct in the world between 1896 and 2003 until the introduction of the Magdeburg Water Bridge. The Briare Aqueduct was originally designed to replace a river-level crossing as it was too susceptible to being flooded.

Today, explore Briare, discovering the 19th-century Château de Trousse-Barrière, formerly an old farmhouse and bought by engineer Hugues Cosnier at the time of the construction of Briare's canal. Later make a visit to Briare's Museum Conservatory, dedicated to the Loire Valley and its canals. Become immersed in the traditions of this proud canal-faring region as you learn about the development of boating on the Loire and the navigational techniques that sailors used to utilise.

Following time at the museum continue cruising to Léré, a small town set amidst a popular farming area and by the banks of the Loire.

Today explore beautiful, medieval Sancerre, an attractive hilltop town that overlooks the undulating scenery of its surrounding region. Léré was formerly in the land of Gaul and settled by the Celtic Bituriges tribe, more recently Sancerre was a regional command centre for the French Resistance in the Second World War, coordinating the destruction of many bridges in the region to hinder German movements. After time here, you are treated to a tasting of the region's famous aromatic Sauvignon Blanc, along with a selection of cheeses at a goat farm.

Whilst Sancerre was once known for its Pinot vintages, a terrible case of phylloxera insects decimated the vineyards. During the replanting process, the formerly favourable Pinot grapes were replaced with Sauvignon Blanc crops, which it is famous for today.

Today enjoy a visit to Pouilly-sur-Loire, an idyllic town which is famous for its white wines. Take a tour of the vineyards and cellars where the Pouilly-Fumé grape is grown and the wine stocked. The grapes of this wine form a grey bloom coating at maturity, which is the colour of smoke, hence the 'Fumé' name; however, Fumé also describes the celebrated 'gun smoke' bouquet of this particular wine. Indulge in a tasting that allows you to experience the famous flavours of this delightful wine first hand. Fittingly, the wine cultivated in this area of France would be exclusively exported and delivered by barge, after the opening of the Canal de Briare in 1642. Afterwards, continue to Chapelle Montlinard, a rural village that comprises of farmland and a small collection of rustic hamlets.

Today enjoy a tour of La Charité-sur-Loire, built around its priory - the original Cluniac priory in the area which has withstood much turmoil in its long history, including a great fire and the French Wars of Religion - during which it endured an 8-month siege by Catholic forces. During the French Revolution a road was planned to cut through the land on which the priory stood, but thankfully it was saved by a report by Prosper Merimée, the first inspector of monuments, who thought the priory was historically significant enough to be spared. Make a visit to the priory before heading to a nearby farm. After time to explore, return to the ship, where a Gala dinner is served tonight.

Explore Fontmorigny Abbey today, a former Cistercian monastery that is now privately owned and has seen a resurgence of late, becoming one of the most popular monuments in the region. You then see the floral gardens of Apremont-sur-Allier, where there is free time to discover the delight of its gardens - considered some of the most beautiful in France - at your own pace. Tonight, enjoy a lantern-lit tour of Nevers.

After breakfast disembark in Nevers then transfer to Paris for the Eurostar service to London.

An escorted experience and all travel arrangements

Comfortable accommodation in your destination