A true discovery of the Scottish Highlands by train

Travel to the heart of the Scottish Highlands and take in the marvellous lochs and glens as you travel by vintage steam train on the superb West Highland Line and cruise Loch Lomond. 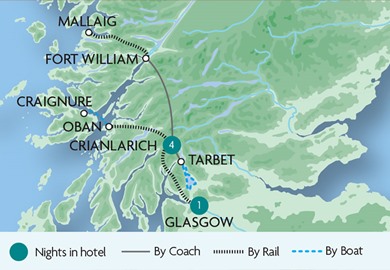 Your Tour Manager greets you in Glasgow, then the rest of the day is free for you to explore.

Straddling the River Clyde, the sprawling metropolis of Glasgow is one of Europe's most popular destinations. It is a lively centre of vitality and style, complemented by the backdrop of its rich history and outstanding Victorian architecture. The city's beginnings can be traced back to ancient times, when it was first settled as a ford on the river. After its cathedral was established, Glasgow was granted a 'burgh' status, meaning it was awarded certain trading monopolies.

Travelling between Glasgow, Oban, Fort William, and Mallaig, the West Highland Line covers some of the most beautiful areas of Scotland. As you leave beautiful Glasgow, become immersed in the wild and windswept panorama of the Scottish Highlands.

On arrival, transfer to the Best Western Crianlarich Hotel where you enjoy dinner. Crianlarich is a village in Perthshire, whose name is derived from the Gaelic for 'low pass' because of its location in a glen surrounded by several mountains. The villagers call their village the 'gateway to the Highlands'. Crianlarich boasts a beautiful walking and cycling trail, and stunning views of Ben More, one of the highest hills in the area. Replete with grassy hills and serene walks, the village is an ideal retreat for travellers.

This morning travel to Tarbet for a cruise on majestic Loch Lomond - Britain's largest inland body of water. This freshwater Scottish loch is located at the border of Central Scotland and the Highlands. Its home to many fresh water fish and the surrounding hills play host to a huge array of birds, Loch Lomond, much like Loch Ness, is often used as iconic depiction of picturesque Scotland and has obviously been lauded for generations, being mention in old Scottish folk songs. It is surrounded by the Loch Lomond and the Trossachs National Park.

Afterwards, you stop at Inveraray, a town on the western shore of Loch Fyne. Why not explore the magnificent castle or visit Inveraray Jail while you're here? Inveraray Castle's unique architecture incorporates Baroque, Palladian, and Gothic styles. It is said that in 1744 the castle was fully demolished and reconstructed by the then Duke and the end product was not a traditional Scottish castle but more of a Georgian mansion on a grand scale. Queen Victoria had visited the castle in 1874.

Inveraray Jail is a 19th century prison and courthouse that is now a 'living museum' recreating the history of the era. You have the chance to interact with costumed characters, watch courtroom trials, talk to 'prisoners', witness cell life, sample the punishments, and browse the prison artefacts before you make your escape.

Today, transfer to Oban for the ferry to Craignure, on the Isle of Mull. On arrival, make a visit to Duart Castle, the ancestral home of the Maclean Clan. Enjoy a guided tour of the imposing estate, built on the end of a peninsula jutting into the Sound of the Mull, before returning to Oban for some free time. Oban derives its name from Gaelic and means 'little bay', and the town boasts some dramatic beaches, as well as one of the oldest distilleries, and a factory for homemade chocolatiers. There are beautiful castles close by, as well as McCaigs Tower on Battery Hill overlooking Oban.

Join the Jacobite Steam Train* today for a magnificent journey on the final leg of the West Highland Line. Hailed as one of the great railway journeys of the world, the service began operating in 1984 as a tourist attraction. One of the most iconic landmarks to look out for is the Glenfinnan Viaduct, an incredible feat of engineering that was opened in 1901. Most famous for being featured in the 'Harry Potter' films, the viaduct stretches over some truly impressive views that cement the West Highland Line as one of the most scenic lines in the world, The Jacobite travels from Fort William to Mallaig, passing lochs, rivers, mountains, silvery beaches, and beautiful villages along the way. On arrival in Mallaig, a quintessential Highland port town, why not try the catch of the day?

*Steam-hauled when possible. Some departures will make this journey on Scotrail's diesel service.

Head back along the West Highland Line to Glasgow, where your tour ends. You are free to explore Glasgow on your own or depart at your leisure.

Please note that while every departure of this tour features the same excursions, they may not necessarily be in the order listed above.