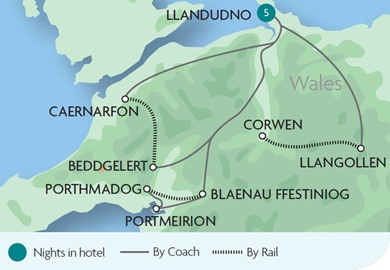 Today you arrive in the town of Llandudno, where you meet your Tour Manager at your hotel for the next five nights, the family run Kensington Hotel. This classically-styled Victorian Hotel enjoys a superb position on Llandudno's central promenade and enjoys fantastic views of Llandudno Bay.

A township since the thirteenth century, Llandudno, like many British coastal resorts, rose to prominence in the Victorian era. By 1848 Llandudno had become an established fishing and copper-mining town with a population of around a thousand when it was proposed that the town might achieve further prosperity as a holiday resort. Significant development followed, including the construction of a new pier, seafront promenade, a pavilion, plus new hotels and guest houses.

Modern Llandudno retains its Victorian splendour and natural beauty but also offers a host of entertainments for visitors including both a tramway and a cable car to the summit of Great Orme as well as museums, public gardens and traditional seaside amusements.

You have some time at leisure to explore the surrounding area before you enjoy a welcome dinner at the hotel this evening.

Today, enjoy an excursion on the steam-hauled* Ffestiniog Railway, a narrow-gauge heritage railway in the Snowdonia National Park. The Ffestiniog Railway was originally founded in 1832 as a means of transporting slate, and miners, from the quarries at Blaenau Ffestiniog to Porthmadog, and claims to be the oldest independent railway company in the world.

You travel through the scenery of Snowdonia National Park to Porthmadog. From here it's on to Portmeirion, famous for its lovely location.

Visitors arriving in Portmeirion for the first time could be forgiven for thinking that they had arrived in a typically colourful Italian- Mediterranean village. In fact, that was the intention of Portmeirion's designer; the renowned Welsh architect Sir Clough Williams-Ellis. You may wish to visit the central piazza or Battery Square, and its quaint souvenir shops.

You travel along the banks of the River Dee to Carrog Station. After some free time for lunch, enjoy a horse-drawn boat trip along the Llangollen canal.

A day at leisure

Your day is free, explore Llandudno further or perhaps take the Great Orme cable-hauled tramway for breathtaking views of Snowdonia and Anglesey.

Llandudno's historic highlights can be easily explored on foot, and a dedicated town trail provides a recommended route which begins at the town's library and takes in notable features, including several of Llandudno's churches, the promenade, the railway station, the pier and two of the town's public gardens.

You could also choose to visit the Great Orme Copper Mines. In 1987, the world's largest prehistoric copper mines were discovered beneath Great Orme, and today visitors can explore a network of tunnels laboriously excavated by our Bronze Age ancestors around 3,500 years ago.

A full-day excursion by coach takes you through some of the most dramatic mountain scenery in Britain to Caernarfon for a guided tour of Caenarfon Castle. Continue with a journey on the Welsh Highland Railway*, a narrow-gauge line running along the foothills of the Snowdonia Mountain range, to Beddgelert where there is time to explore this pretty village before returning to Llandudno.

Located where the rivers Glaslyn and Colwyn meet within the Snowdonia National Park in north Wales, the picturesque stone village of Beddgelert is surrounded by beautiful wooded valleys, rolling hills and mountain lakes. Snowdon itself, Wales' highest mountain, is fewer than five miles north of the village.

After breakfast, you are free to depart at your leisure. Alternatively, why not explore more of this wonderful area before heading home? You could take a final walk around the beautiful town of Llandudno. Traversing the crescent-shaped bay between Great Orme and its smaller twin Little Orme, Llandudno's wide promenade is backed by grand, white-washed Victorian hotels and is a delightful spot to sit back on one of the many benches provided and watch the world go by.

What our customers think
94%

based on 15 verified reviews

Good choose of railways, brilliant coach driver who gave good local information on areas we passed. and the tour rep who was cheerful and kept everything running smoothly.

Enjoyed the excursions and the holiday

not as good as previous holidays with rail discoveries. Tours out good in all respects. Hotel generally good but the dining room arrangements were not to our liking having to order the evening meal at breakfast is not good and then having to sit at the same table because of this is poor.

we assumed this holiday was about the trains and were a bit disappointed that the journeys we took were not the full distance. we do now understand that that is not the companies aim. we did have a very enjoyable time

Already done this before leaving hotel.

Everything about the holiday was excellent, the tours were all well presented. The tour manager kept us well informed of any time changes. There were 43 of us in the group, every one was on time for all events, the coach driver was excellent, well versed in local history, and full of jokes to keep us laughing. The hotel staff were friendly and efficient, all meals were of a good standard, one minor criticism, too many vegetables served, therefore a lot of wastage.

This very popular tour offers such a variety of excursions from our comfortable family run hotel in the carefully preserved Llandudno sea side resort. There are three heritage railway journeys, a horse-drawn canal ride, Portmeirion, an Italian style village, and Caernarfon Castle to explore. Llandudno has lots of things to do on a free day too. The Great Orme tramway has to be a must for all our passengers. Tip: sit backwards going up for the best view of Llandudno Bay.