Tucked away in the north-western corner of the German cultural region of Hesse, Assmanshausen is a traditional and charming rural town with a history of winemaking that can be traced back to the twelfth century.

Assmanshausen nestles on the banks of the mighty River Rhine at the foot of gently sloping hills, 185 acres of which have been terraced to allow the grapes of the town's vineyards - the largest contiguous plantation of Pinot Noir vines in Germany - to ripen to perfection in the region's sunny Mediterranean-like climate. The fine red wine produced as a result can be sampled in many of Assmanshausen's inviting and traditional inns and cafes.

Steeped in natural beauty, the landscape surrounding the town rewards exploration and walking trails to suit all abilities begin in the wooded coppice that crowns the hill overlooking the town. This is reached by the Assmanshausen Cable Car which gently ascends from the town to a hunting lodge where deer wander freely through the woods.

Providing the option to visit numerous wineries, take a river cruise along this spectacular section of the Rhine or simply enjoy and admire this pretty town and its beautiful surroundings, visiting Assmanshausen guarantees a relaxing, rewarding and unforgettable break. 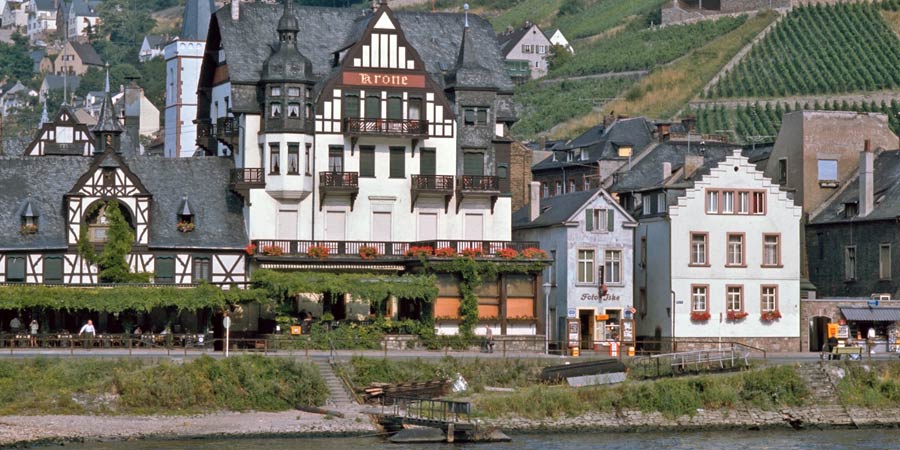 Perched in the hills directly across the Rhine from Assmanshausen, Burg Rheinstein is just one of the many remarkable examples of a strategic medieval castle that can be found in this region of Germany. Built in the fourteenth century the castle gradually fell into disrepair and was almost derelict by the time Prince Frederick of Prussia bought it in the nineteenth century and restored it to its former magnificence. Today Burg Rheinstein is open to the public.

Set in another superb and ancient castle, Brömserburg, the Rheingau Wine Museum explores the long history of winemaking in this region of the wine on a tour through every level of the castle. The museum's collection contains over two thousand exhibits relating to every aspect of the wine making process and, naturally, there is also the opportunity to sample the finished product itself.

A pleasant forty-five minute walk from the upper station of the Assmanshausen Cable Car, the Niederwald Monument was begun in 1871 and inaugurated twelve years later. Symbolising the foundation of the German Empire, this impressive monument is topped by a ten-metre high bronze statue of Germania clutching the Imperial Sword and Crown.