Described by eighteenth-century European Romanticists as the 'wildest daughter of Father Rhine', the Ahr River, set in a deep gorge, winds its way through an ever-changing landscape of rolling green hills, rocky promontories, wildflower meadows and stout forests.

This small but idyllic corner of western Germany, to the north of the city of Bonn, is renowned for the quality of its red wines, and many of the Ahr Valley's fertile and south-facing hillsides are dominated by terraced vineyards.

0 results matching: A Tour of the Romantic Ahr Valley

Beneath the vine-clad slopes several charming and historic wine-producing villages hug the river's edge. Pretty Altenahr, overlooked by the ruins of the twelfth-century castle Burg Are, is notable for its beautiful half-timbered buildings and is a popular destination for wine buffs, particularly in the summer when this ancient village hosts its annual Weinsommer festival. Mayschoss sits at the foot of the imposing Monchberg (Monk Hill; this was once the site of an Augustinian monastery), where sun-kissed terraces have been carved into the curving hillsides, providing the perfect conditions for cultivating the village's precious harvest of Pinot Noir grapes. Further friendly Ahr Valley villages such as Walporzheim, Dernau and Rech each have their own historical, cultural and architectural treasures for visitors to discover, and a tour of the Ahr Valley provides the perfect opportunity to enjoy all that this romantic region of Germany has to offer. 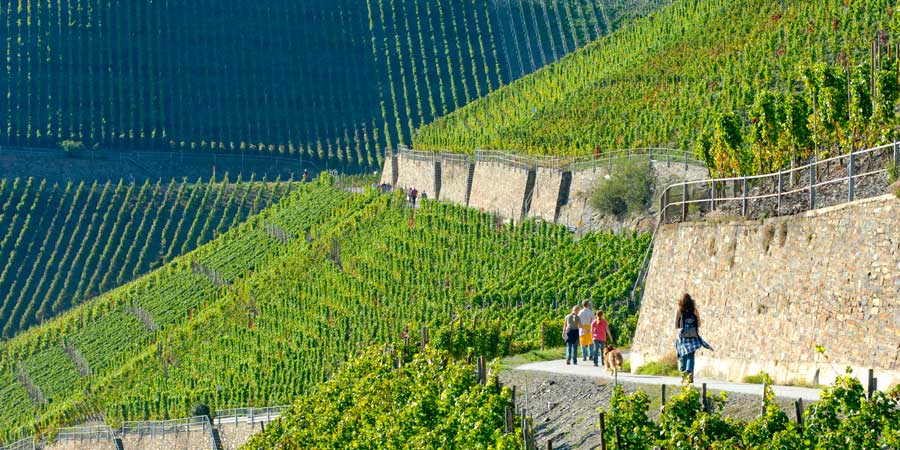 The Red Wine Walking Trail, which stretches for thirty-five kilometres between the villages of Altenahr and Bad Bodendorf, is one of Germany's most popular walking routes. Winding through the vineyards, hills and meadows that line the Ahr River, there are few more enjoyable ways to experience the outstanding natural beauty of the Ahr Valley than by walking the Rotweinwanderweg.

The city of Remagen is the starting point for journeys along the Ahr Valley Railway, the twenty-nine kilometre route passing through some of the region's finest scenery and stopping at many of its traditional villages. The city itself is rich in culture and history, and is particularly famous as the location of the Ludendorff Bridge, a strategically important Rhine crossing which -crucially for the Allied war effort - was captured by the US army during the Second World War.

During the construction of a new road near the ancient spa town of Bad Neuenahr-Ahrweiler in 1980, the remains of a Roman villa complete with large bathing room and dating from the third century were discovered. Remarkably well-preserved, the villa now has its own museum which allows visitors to walk through the remains and recreates the lifestyle and culture of the Roman era via displays of artefacts found at the excavation site and interactive exhibits.