For a small village in the Lot department of France to attract more than one million visitors each year, it has to be extraordinary. First impressions don't disappoint: Rocamadour is a destination quite unlike any other.

The entire village clings - seemingly precariously - to the side of a towering and steep cliff-face, atop which stands an imposing fourteenth-century castle. Standing above a tributary of the Dordogne River and surrounded by rolling forested hills, Rocamadour resembles something from a fairy tale.

Besides the village's spectacular and gravity-defying location, Rocamadour's popularity rests upon its reputation as a place of miracles. Deemed to be the final resting place of the Biblical Saint Zacheus, whose supposed remains were discovered in a fissure in the cliff face, Rocamadour quickly became a pilgrimage site during the Middle Ages. A series of chapels, known as the Sanctuaries, built halfway down the cliff between the twelfth and fourteenth centuries, contain many historic religious artefacts including a wooden carving; the 'Black Madonna', to which many miracles of healing have been attributed. 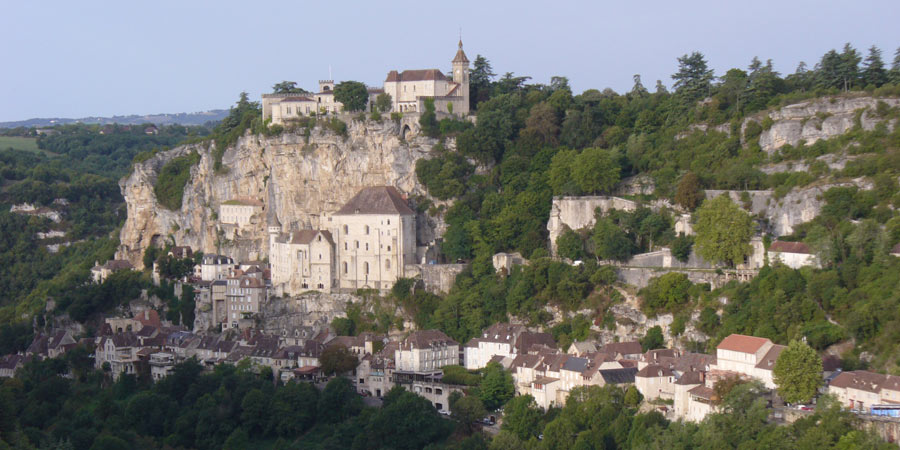 An ancient flight of stone steps zig-zags up the cliff face to Rocamadour's various sites of historic interest, but there is also a modern lift to ensure accessibility for everyone. The 'old village' at the foot of the cliff is a delightful jumble of medieval buildings and contemporary shops, cafes, restaurants and hotels.

Standing on the plateau atop the cliff on which the village is built, Rocamadour's impressive castle was built during the medieval period to defend the Sanctuaries and village beneath it. Those who make the ascent to the clifftop are rewarded with breath-taking panoramic views from the ramparts of the river valley and surrounding countryside.

Rocamadour's 'Cave of Marvels' features not only some spectacular stalagmites, stalactites and natural rock formations but also superb examples of pre-historic cave art including images of animals that are an estimated twenty-thousand years old.

La Maison des Abeilles - 'the house of bees' - is a fascinating living museum which provides an insight into the historical importance of bee-keeping to this area of France. The museum examines every aspect of bees and bee-keeping and visitors can observe a (perfectly safe) demonstration of a bee-keeper handling swarms of up to fifty thousand bees.

Established in 1974 on the outskirts of Rocamadour, the Monkey Forest comprises a fenced enclosure of fifty acres of woodland where around 130 Barbary Macaques, a protected and endangered species, live freely among the trees. The park gives visitors an unrivalled opportunity to observe and even feed these playful animals.