According to local legend, this vast chasm - it has a diameter of almost thirty-five metres - was created by the Devil, who challenged Saint Martin to leap across it in order to save the souls of peasants sentenced to damnation. Naturally, Saint Martin triumphed.

In fact, Le Gouffre de Padirac was first explored in 1889 by lawyer and explorer Édouard-Alfred Martel, who quickly saw the cave system's potential as a public attraction. Funded by brewing entrepreneur George Beamish, Martel was able to invite the caves' first visitors in 1898.

More than a century later, Le Gouffre de Padirac is considered one of the world's foremost underground attractions. The spectacular initial chasm can be descended either by stairs or by lift. A gondola ride along a tranquil subterranean river then transports visitors deeper into the cave system where the beautiful rock formations within further chambers can be explored.

In an area of France renowned for its caves, visiting Le Gouffre de Padirac stands out as a truly unique and unforgettable experience.

The Gouffre de Padirac (the name approximately translates as 'the abyss of Padirac') has been described by the reputable Michelin tour guide as "one of the most extraordinary natural phenomena of the Massif Central".

The underground river is a tributary of the nearby Dordogne River, and one of its highlights is the Grande Pendeloque; an enormous sixty-metre stalactite which is suspended above a subterranean body of water known as the Rain lake. Approximately two kilometres of chambers and caverns are navigable by visitors, although the Gouffre de Padirac's underground network is known to extend for at least twenty-five kilometres. 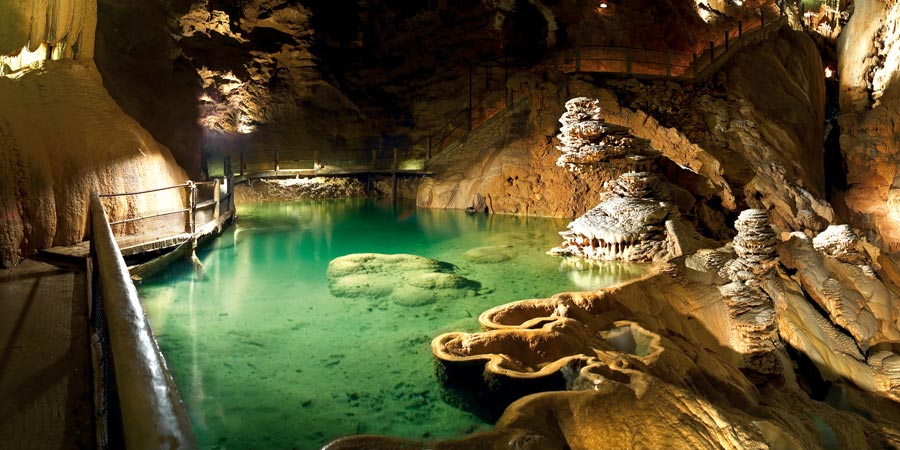 The most spectacular of the chambers open to the public is the Grand Dome Cavern. Formed over millennia, the ceiling of this vast chamber rises ninety-four metres overhead and the cavern is studded with beautiful exotic and eccentric mineral cascades and formations of every shape and size.

Back at ground level, the Gouffre de Padirac offers a range of facilities for visitors including a restaurant and bar, a gift shop, a children's play area, rest rooms and a picnic area.