Spectacular colours and beautiful mountain scenery come together on an autumn adventure along America's East Coast. This is a seasonal tour that brings out the very best of stunning New England. 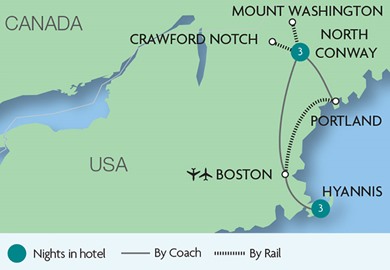 Depart London Heathrow for Boston airport, transferring to the town of Hyannis on Cape Cod on arrival, where our hotel is based. Hyannis is perfectly-placed for you to enjoy your time in this fantastic part of the world where the Kennedys used to holiday every year

Today, venture forth from the hotel to take a ferry to nearby Martha's Vineyard. This beautiful New England resort is known to be the summer escape for New England's elite, and is therefore an incredibly beautiful and elegant place.

The 'Vineyarders', as the island's residents are known, are extremely protective of their heritage and traditions, making Martha's Vineyard seem gorgeously historic with a relaxing atmosphere. This island is also fairly untouched by the 'big businesses', which gives it a delightfully smalltown feel.

Your excursion begins with a visit to pretty Rhode Island, starting at fashionable Newport in the morning. Long a destination for rich visitors from across American, Newport is home to some marvellous mansions and to an annual sailing regatta which attract thousands of competitors and spectators from across the globe. It was also one of the first cities built in America by European settlers.

Your time spent is free to take in the historic beauty of the city, including Hammersmith Farm, the childhood home of Jacqueline Bouvier, later Jacqueline Kennedy Onassis.

This morning, transfer to Boston, where you take a guided walking tour of the Freedom Trail and Quincy Market. Boston is one of the most important cities in the young history of the United States. Founded back in 1630 by the British colonisers, it is also one of America's oldest cities, and played a vital role in the American Revolution with such iconic events as the Tea Party and Siege of Boston taking part in the harbour and city outskirts. The Freedom Trail reveals part of this history, revealing the locations and battles which took part in the city.

Following your visit here, transfer to Salem, where you have time to explore. Salem is infamous for its witch trials in the late 17th century, during which time more than 200 men and women were accused of witchcraft. It is now widely recognised as having a connection with the paranormal, a connection which often dwarfs the significance of Salem as an early American seaport.

Discover the awe-inspiring scenery that makes New England such a beloved place to be in the fall season whilst on a journey aboard the Mount Washington Cog Railway. Taking you up to a spectacular vantage point that looks out over the golden-hued trees blanketing the surrounding hills, this is truly the perfect way to enjoy autumn.

Red, yellows and greens are sewn into the fabric of the fall tapestry in New England, and we travel through this beautiful world to the summit of Mount Washington We have time to soak in our surroundings before our train makes the descent through the Arcadian forests.

On your return to the hotel, you enjoy a scenic route that takes in the White Mountains, Crawford Notch, and the Kancamangus Scenic Highway, all of which look resplendent in their autumn dress.

Board your coach for a full-day fall foliage tour in and around Vermont. Discover Woodstock as well as the awesome Quechee Gorge which spans the rushing Ottauquechee River.

We also enjoy another drive on the glorious Kancamangus Highway which winds its way through the deep forest, under the gold-bearing branches and under the crisp north American sky.

After breakfast, transfer to Portland where you join the Amtrak service to Boston. Your afternoon is at leisure. Perhaps take the time to venture to the huge expanse of parkland at Boston Common, the oldest city park in the USA. It was originally used by the British as a camp during the American Revolution before it was reclaimed and given as a public area to the people of the city.

Later you head to the airport in order to board your flight back to London, arriving on Day 8. Upon arrival, your American adventure comes to an end.