Edinburgh and the traditions of the Highlands

Marvel at the awesome spectacle of the colourful Edinburgh Military Tattoo during this exciting tour based in Edinburgh. Completing the trip, enjoy a journey on the Strathspey Steam Railway and a visit to the Highland Wildlife Park. 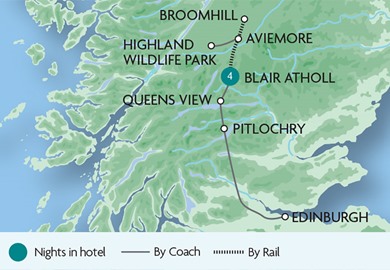 Your tour begins in the pretty Highland village of Blair Atholl, where you meet your Tour Manager and the rest of your group at the 3* Atholl Arms Hotel. Blair Atholl is a picture-perfect village in Cairngorms National Park, an area of spectacular natural beauty filled with the stunning scenery that makes Scotland famous - dense forests, wild moorlands, mountains, lochs, and quaint country villages.

Travel by coach this morning to one of Scotland's most famous and most photographed lookouts, Queen's View. Supposedly named after 14th-century Queen Isabella, wife of Robert the Bruce, after she used the picturesque spot to have a rest when travelling through the area. Queen's View offers stunning lake and mountain panoramas, stretching out across glimmering Loch Tummel to the beautiful Glencoe Hills in the distance.

The heart of the city is a UNESCO World Heritage site, delightfully blends the old with the new with its medieval Old Town, Georgian New Town, and award-winning modern architecture. It is easy to see why Edinburgh was once regarded as the 'Athens of the North'.

Why not visit the Scottish National Portrait Gallery, where you can learn more about Scotland's unique history, displayed visually through portraits of those who influenced and inspired it?

You will also be able to visit Edinburgh Castle before the festivities kick off this evening. Set overlooking the city, the castle offers fantastic views of the surrounding area and over to the Firth of Forth. The buildings date from between the 12th and 20th centuries, reflecting the castle's changing role as fortress, royal palace, military garrison, and state prison. You can also view the Scottish Crown Jewels and the city's oldest building, the 11th-century St Margaret's Chapel which lies within the castle grounds.

This evening, settle into your seats for the highlight of your trip, the Edinburgh Military Tattoo, set against the magnificent, floodlit backdrop of Edinburgh castle.

The Tattoo is an incredible, annual musical spectacular combining music, entertainment, ceremony. The first official Edinburgh Military Tattoo took place in 1950 with around 6,000 spectators. Today, over 200,000 people flock each year to watch the performances, which include the Massed Bands of Her Majesty's Royal Marines, and a fantastic firework display.

At leisure in Blair Atholl

Today you are free to enjoy Blair Atholl and its wonderful surroundings. Nearby Blair Castle is a fairytale castle with stunning white-washed stone walls and exquisite landscaped gardens, and is a delight to explore. It also boasts a fascinating history dating back to 1269, and is most famous for being besieged during the Jacobite Rebellion of the 18th century.

Another option is to travel by rail to Pitlochry, one of Perthshire's main tourist destinations. This beautiful town has been a favourite spot of tourists since Victorian times, and this historic heritage is still evident to this day, with an array of Victorian stone buildings found dotted about the town.

Alternatively, discover the beauty of the Scottish countryside and follow one of the many local trails for a scenic walk.

Take the spectacular mainline rail service through the Cairngorms to Aviemore, where a nostalgic railway ride on the Strathspey Steam Railway awaits. This line is one of the most scenic in the country, and runs through the spectacular scenery of the Cairngorms National Park. Enjoy passing views of lush forests and moorland as you follow the winding route of the River Spey on this delightful return journey.

Next, board a coach which takes you to the Royal Highland Wildlife Park in the heart of Cairngorms National Park. Run by the Royal Zoological Society of Scotland, the 260-acre park has been open since 1972, and is noted for its dramatic setting, as well as the vast range of wildlife that are housed.

On arrival, enjoy a guided drive around the main reserve of the park, followed by some time at leisure to look around the park at your own pace. Say hello to the native Scottish wildcats, and visit the polar bears, tigers, wolves, and snow leopards.

This morning, your tour concludes. You are free to depart after check out.

What our customers think
100%

based on 2 verified reviews

Good hotel but too far from the \Edinburgh festival , so too much time was spent travelling

A good combination of activities; well looked after; liked the "free day" in the middle

fine--although the tattoo organisation was terrible that of course is not your fault--very long queues, a stand, we were at the top, to steep and to difficult to access a lot of people missed the start as it took far to long to get in.Why let people in to late--to get to their seats

We enjoyed the whole experience ! Tattoo , Hotel , Blair Atholl , the Strapthsey Steam Railway , The Cairngorms and Blair Castle were Extremely well organised ! We MUST point out , though , that the QUEUING to get into the Tattoo was one of the worst organised experiences of my life . I can understand about the Hillsborough Disaster now . This was NOT Rail Discoveries Fault , but YOU should point it out to them ! Meanwhile , the Coach Drivers were also very good !

The Hotel was not as good as expected - poor housekeeping issues, though food good. The Rail Experience was good.

Edinburgh Tattoo and Aviemore railway excellent. But rather too much waiting around.

Everything worked very well and the hotel food and tour manager were excellent.We had a wonderful experience but the lack of porterage facilities at the hotel made us struggle with our cases eight flights of stairs only to be greeted with a room that had a broken window, sower that ran cold and a bath with black mould round the surrounds put a damper on the holiday

All about the Edinburgh Tattoo
Why spontaneous travel is so liberating, and where to go
Top Destinations for Solo Travellers
The Traditions of Burns Night
Helen
Luke